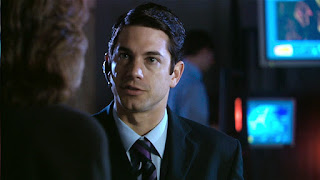 Personal assistant to the British Prime Minister Harriet Jones at the time of the Sycorax invasion. A resourceful young man, he was one of those transmatted up to the Sycorax spaceship as it hovered over central London. He had a translation device which allowed Jones to communicate with the aliens. It was when he no longer had to translate that Rose knew that the newly regenerated Doctor had recovered. After being returned to the city, the PM advised Alex to notify Torchwood that they could fire upon the retreating Sycorax ship, destroying it. The Doctor used Alex to plant the seeds of doubt about Jones' fitness to lead the country - bringing about her downfall with the words "Doesn't she look tired". It would have been Alex who promulgated this rumour.

Played by Adam Garcia. Appearances: The Christmas Invasion (2005).
Posted by GerryD at 00:08