A is for... Achilles 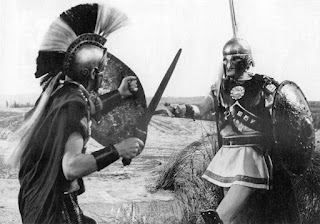 The not-so-legendary Greek hero of the Trojan Wars. Achilles was fighting with Hector, son of the Trojan King Priam, when the TARDIS materialised on the plains outside the besieged city. The appearance of the Doctor distracted the warriors - allowing Achilles to strike a mortal blow. Achilles whole-heartedly accepted the Doctor's assertion that he was the god Zeus. Achilles found that his fellow warrior Odysseus did not believe him.
Later, during the sack of the city, Achilles was killed by Priam's younger son, Troilus.