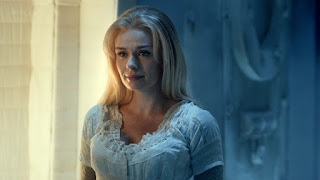 Temporary companion of sorts to the Eleventh Doctor, Abigail was a young woman from the Earth colony Sardicktown. Terminally ill, she had allowed herself to be cryogenically suspended as collateral on a loan to her family from Elliot Sardick, who ran the community. His son, Kazran, became besotted with her. When the Doctor and young Kazran needed one of the freezer cabinets to transport a sick cloud shark, they used hers. It was found that her singing could calm the creatures.
Abigail - surname Pettigrew - was released from her cabinet on a number of Christmas Eves over the next few years. Each time saw her move closer to her death. She fell in love with Kazran on the various trips organised by the Doctor - usually to different places and times on Earth. On one occasion she got to meet the descendants of her family.
After attending one of Frank Sinatra's parties, she told Kazran the truth about her condition. He knew that her next release would be her last and so distanced himself from the Doctor - eventually becoming a miserly, embittered old man like his father. In order to save Amy and Rory, and a spaceship full of people who were about to die when the vessel they were on crashed, the Doctor helped redeem Kazran. Abigail was released one last time - on Christmas Day for a change. Her singing helped to sooth the turbulent skies and so aid the ship to make a safe landing. She and Kazran enjoyed one final day together, flying through the air in a carriage pulled by a shark. 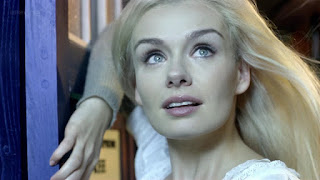 Played by Katherine Jenkins. Appearances: A Christmas Carol (2010).
Posted by GerryD at 23:31