Power of the Doctor Update 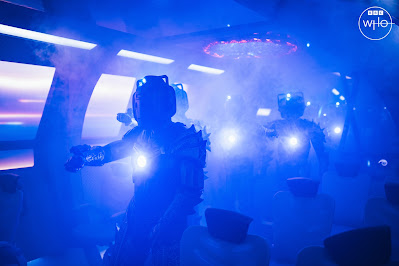 Increasingly likely that The Power of the Doctor will be shown on the weekend of 22/23 October (23rd if they are sticking with Sundays). This is based on gaps in BBC America schedules that weekend, as well as the fact that that closes the week which sees the actual 100th anniversary of the BBC (18th Oct).
Two bits of synopsis have slipped out: "Who is attacking a bullet train on the edge of a distant galaxy?" and "Why is a Dalek trying to contact the Doctor?". The first question is likely connected to the photograph above, which clearly shows Cybermen on a passenger craft of some kind.
Empire Magazine have given us a new picture of the Doctor on some quarry-like planet (or just in a quarry). 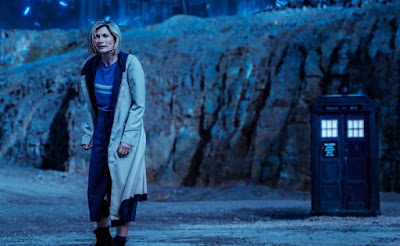 Looks very like Metebelis III to me - very blue. The magazine also confirms what we have known for a while - the return of Bradley Walsh's Graham. He was seen with John Bishop last summer in Cardiff.
Still no new trailer, but less than four weeks to wait.
Posted by GerryD at 20:02
Email ThisBlogThis!Share to TwitterShare to FacebookShare to Pinterest
Labels: Centenary Specials