The penultimate episode of this half of series 7 aired last night, with a very respectable 5.49 million viewers tuning in to watch. (The fourth autumn episode last year managed 5.2 million). It was earlier revealed that the time-shifted viewing figures for Dinosaurs on a Spaceship were even greater than those for Asylum of the Daleks (over 2 million for Dinosaurs, as opposed to just under that figure for Asylum).
We are now entering into the last week with the Ponds. Time to increase your Anti-Spoiler protection. I've been offering weekly spoiler-free round ups as we have gone along this month, but am thinking of sitting this week out - there's just too much risk of coming across something significant about the conclusion to The Angels Take Manhattan.
For instance, I took a look at the Canadian trailer last night and saw a significant spoiler about one element of the episode (though it is one I might have guessed at).
There is a preview screening of episode 5, hosted by BAFTA Cymru, in Cardiff on the evening of Wednesday 26th September. 70 lucky people will find out tomorrow if they have nabbed tickets in a random e-mail draw.

Elsewhere this week, Doctor Who and its principal cast have been nominated in the NTA's as usual. Voting is open until 11th October. Check the official website and register your vote:
http://www.nationaltvawards.com/

A UK convention is planned for early next year which aims to raise money for a worthwhile cause. Sadly, Tegan actress Janet Fielding has a fight with cancer on her hands, and Peter Davison and a number of other Doctors (Colin, Sylv, Paul & David) are getting together to help as best they can with a project that's dear to her heart. The event's already sold out, but if you want to know more here's a link:
http://projectmotormouth.org.uk/
Brave heart, Janet...

DWM 452 was released on Thursday. The only Series 7 news item was that the next episode to go in front of the cameras will be Stephen Thompson's story, and that Ashley Walters guests. On the inside back page it is revealed that the next issue will carry a Mary Tamm tribute. 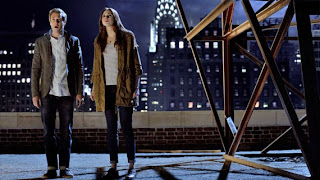 Next week it is all about that fateful final adventure for Amy & Rory in New York... I'm sure I can hear the cloister bell ringing...
Posted by GerryD at 16:41