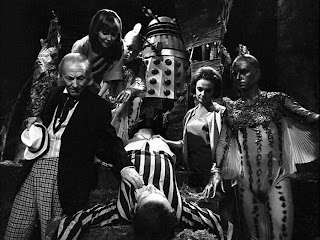 In which the Daleks unveil their own space-time machine and set out to exterminate the Doctor and his companions. The travellers are relaxing in the TARDIS, the Doctor trying to get the Space-Time Visualiser to work. He had earlier picked this up from the Moroks' Space Museum. It can show images of any event in history if you feed in the precise date and location.
Ian chooses Abraham Lincoln delivering the Gettysburg Address, in Pennsylvania, 1863. Barbara elects to see Shakespeare at Elizabeth I's court, being inspired by Sir Francis Bacon to write Hamlet; and Vicki gets to see a TV programme featuring The Beatles. They soon materialise on the desert planet of Aridius, whose two suns race across the sky. The Doctor and Barbara stay by the ship whilst Ian and Vicki wander off to explore. The Visualiser has been left switched on and it warns them that the Daleks are on their way. 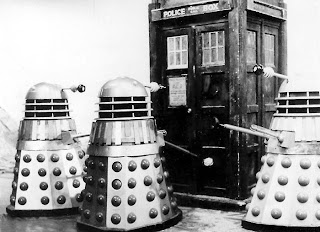 Ian and Vicki find their way into an underground tunnel system which leads to a vast city. The passages are infested with giant, tentacled Mire Beasts, which are carnivorous. The Doctor and Barbara encounter a pair of Aridians - amphibious people who live in the subterranean city which Ian and Vicki have found. The planet was once covered in oceans, but the twin suns have been getting closer and closer, and the seas have boiled away.
The Daleks give the Aridians a deadline by which to produce the travellers, or their city will be destroyed. The Doctor and his companions escape during a Mire Beast attack. They get past the Dalek guarding the TARDIS and flee the planet.
The Daleks are in hot pursuit, however. After brief stops on top of the Empire State Building, 1966, and the deck of the Mary Celeste, 1872, the TARDIS lands in what appears to be an archetypal haunted house - complete with ghosts, Count Dracula and the Frankenstein Monster. The Doctor thinks they have somehow materialised within the human imagination - but it is really an abandoned fun fair attraction (The Festival of Ghana, 1996). 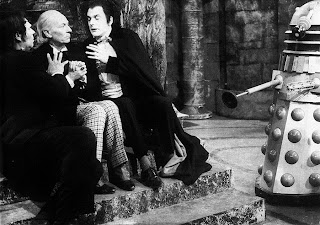 In the confusion of their last departure, they have left Vicki behind. She stows away aboard the Dalek craft. To get her back, the travellers realise they need to capture the enemy ship. Their next stop will have to be the final one. It is the jungle planet of Mechanus. The Daleks unleash a robot replica of the Doctor to destroy the travellers, but it is soon put out of action. The travellers are then captured by a robotic race - Mechonoids - who have built a huge city above the jungle. Also captive is a young space pilot from Earth - Steven Taylor. He explains that the robots were sent here to prepare for a colonisation that never happened. Now they continue to take specimens of flora and fauna - including humans. The Daleks attack the city to seize the travellers. There is a fierce battle and both races annihilate each other. The city is destroyed. Steven disappears in the confusion. Ian and Barbara realise that they can use the Dalek craft to get back to their own time. The Doctor is reluctant at first to help them, but Vicki helps talk him round. They are able to use the Visualiser to confirm they made it safely back to London - albeit it 2 years after they left it. 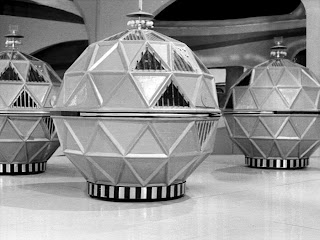 This six part adventure was written by Terry Nation, and was broadcast between 22nd May and 26th June 1965. It is significant not just for the latest appearance of the Daleks, but for the departure of the last of the original companions.
Terry Nation was very reluctant to write a third Dalek tale as he feared the creatures' popularity was waning, but pressure from the production team convinced him to give it a go. Rather than a conventional tale told in one place and time, he took a leaf out of of his Marinus adventure and came up with the chase concept. By arriving in different places and times each week, the story could be kept fresh for the audience, and each component would need only a little effort to make it work.
The locations range from the aptly named desert planet of Aridius (though quite how the original inhabitants knew a water world would end up like this, I don't know), through to the jungle world of Mechanus. (Named I presume by the Mechonoids rather than the intended human colonists). In between we get some Earth locations - a viewing platform of the Empire State Building, New York, 1966; and the famous Mary Celeste  in late 1872 - the sudden appearance of the Daleks onboard providing the programme's answer to that great mystery.
Oddest place of all is the cancelled Festival of Ghana's haunted house. The Doctor really does believe that the TARDIS has materialised inside a living mind. The monsters are all robots, but they seem to have a life of their own. The Frankenstein Monster actually attacks a Dalek and threatens Ian and the Doctor. Don't know what Health & Safety would make of all this. 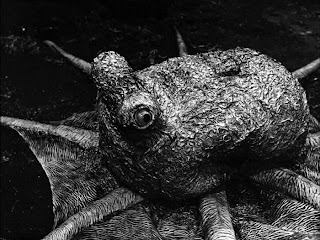 Guest monsters in the Aridian section include the octopoid Mire Beasts. They are never clearly seen, but photographs show them to be of gruesome design. (They are a bright orange by the way). I was going to say the amphibious Aridians are a bit wet - but I shan't.
Mechanus furnishes us with 2 new monsters - the poorly realised giant mushroom Fungoids, and the rather splendid Mechonoids (aka Mechons, aka Mechanoids). They have a geodesic design, and have flame thrower weaponry. The voice is rather childlike and is all in a strange machine code. Yet again, the programme thought it might have come up with a creation to rival the Daleks - but it was not to be. They would feature again in comics - especially the TV Century 21 strips - but would never return to the programme. This was partly to do with their enormous size and impracticality.
The funfair monsters - Dracula, the Frankenstein Monster and a ghostly grey lady (The Web Planet's Roslyn de Winter) are the traditional Universal Horror versions. Dracula mimes his lines terribly - though you could argue it demonstrates how the robots are malfunctioning. 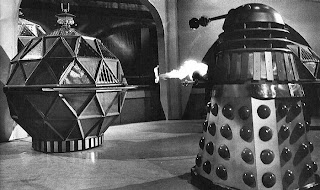 It is not a great story for the Daleks. They start well, with a sighting of the Black Supreme and the reveal that they also have a dimensionally transcendental time machine. On Aridius they exterminate the peaceful natives who have just helped them dig out the TARDIS (under duress of course), and we believe they really would destroy the city if the captives aren't handed over to them for execution. Things then rapidly go downhill and they are almost played for laughs. One of them is very stupid and unable to do basic mental arithmetic. One falls down a hole, and another launches itself overboard from the Mary Celeste - apparently due to simple brake failure. It's only in the final climactic battle that they redeem themselves.
They have the bright idea of creating a robot Doctor to "infiltrate and kill" the TARDIS crew. Shame Edmund Warwick looks nothing like William Hartnell. They may have got away with it from back-of-head shots, but the close-ups are dreadful.

The regulars are all well served in this. There is a great deal of humour - the Visualiser sequence, the Doctor's indignation when he thinks Barbara is criticising his singing, Ian getting accidentally knocked on the head on the Mary Celeste, and the wonderful line from Hartnell when Ian wants items of clothing to build a trap: "We're trying to defeat the Daleks, not start a jumble sale".
Ultimately it is William Russell and Jacqueline Hill's story. I love Ian and Barbara and it is so sad to see them go - though it's a nice touch that their departure derives naturally from the story, with the fully functioning Dalek time machine now abandoned on Mechanus.
The story sets up the new companion in the final episode, though we don't know it yet. Peter Purves' Steven is last seen wandering the jungle in a daze. The actor had been remembered by director Richard Martin from his unsuccessful Menoptra audition, and he was selected  to play the simple country boy, Morton Dill, in the Empire State Building sequence. The production team liked him so much they brought him back as the new companion a couple of weeks later.

Episode endings for this adventure are:

Overall, an ambitious story which is let down by its treatment of the Daleks and a number of design elements. Pity poor Mr Cusick. The Mechanus jungle, with obviously painted floors and lots of drapes and flats is a disappointment. He'll redeem himself by the time we get to Mira... Lots still to enjoy. Goodbye Ian and Barbara - we'll not see your like again.

Things you probably don't want to know about this story but I'm going to tell you anyway:
Posted by GerryD at 22:35