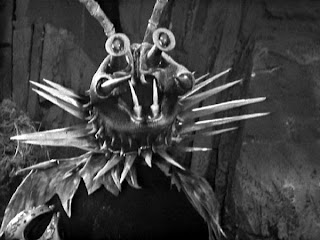 In which the TARDIS materialises on the rocky planet of Dido, in the year 2493. Its arrival on a nearby mountain is registered by equipment in a crashed spaceship from Earth. A girl named Vicki believes it to be the long-awaited rescue ship, but her companion, Bennett, dismisses this. The ship is too far away to have arrived so soon, and couldn't possibly land in the mountains. Vicki calls the rescue ship, and learns that they are still en route. She ponders who, then, might have just arrived...
The ship has actually materialised in a cavern. The Doctor had slept through the landing. He recognises where they are as he has been here before. The people of Dido are friendly. Ian and Barbara follow a tunnel and come out on a ledge, from where they see the crashed spaceship and the ruins of a settlement. 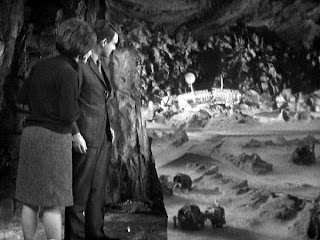 A grotesque alien, armed with a jewelled club appears behind them. He sends Ian to fetch the Doctor, then causes Barbara to fall from the ledge. He uses the club to generate a rockfall - trapping Ian and the Doctor in the cavern. They find another tunnel and start to follow it. Barbara, meanwhile, had her fall broken by a branch. She is found by Vicki and taken to the spaceship. Bennett isn't happy, as the alien - Koquillion - may  be angered by the new arrivals. He has been protecting them from his hostile compatriots - they killed all the other crash survivors. Bennett himself escaped almost paralysed.
The Doctor and Ian encounter a savage looking beast in the caves, and a deadly spiked trap almost causes Ian to fall to his death. When Barbara later sees the same beast, apparently menacing Vicki, she kills it with a flare pistol. Vicki is furious - as "Sandy" the Sandbeast was like a pet to her. 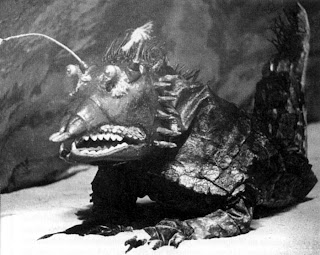 With the TARDIS crew reunited, they learn from Vicki that this spaceship was on its way to Astra when it crashed here. The survivors were initially welcomed. A feast was held but a massive explosion killed everyone - apart from Bennett. Vicki had been too ill to attend. Her father is amongst the dead.
Knowing this world and its people, the Doctor is suspicious. He finds that Bennett has rigged his room so that he can pretend to be present, whilst sneaking out through a trap door. In the Hall of Judgement, he confronts Koquillion - who he knows to be Bennett disguised in ceremonial robes. He admits to murdering a man on the ship and engineering the crash to conceal it. He then killed Didonians and human survivors alike - leaving only Vicki as an unwitting witness to his innocence. A pair of Didonians appear and Bennett flees - falling into a precipice.
The orphaned Vicki is invited to join the TARDIS crew. The two Didonians smash the spaceship equipment - wanting no more humans on their planet. 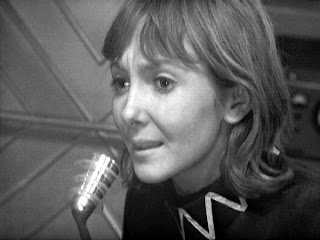 This two part adventure was written by David Whitaker, and broadcast between 2nd and 9th of January 1965. Whitaker had just stood down as script editor on the programme, and so there was no conflict of interest - or with the Writers Guild. He had been replaced by Dennis Spooner, who had little to do on this.
The story serves as an introduction  to the new companion - Vicki, played by Maureen O'Brien. She was 21 when cast, having worked only in theatre in her native Liverpool up to this point. Plans to introduce Susan's replacement from within the previous story had been considered (another orphan called Saida) but this fell through. Whitaker was asked to write this short introductory story as he had previously handled the last minute Edge of Destruction, knew the programme inside out, and was seen as a safe pair of hands.
The Rescue was produced after a 6 week break for the cast and crew. 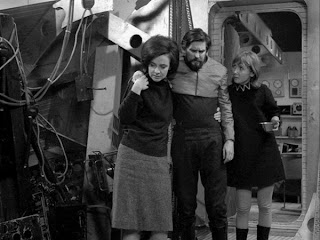 It is a relatively inconsequential little story - designed to showcase O'Brien's talents (she gets to run a gamut of emotions in this). Ian and Barbara are side-lined a little. Hartnell is wonderful. The opening TARDIS scenes are a delight (Barbara, referring to the ship having landed: "Doctor, the trembling's stopped!" "Oh my dear, I'm so glad you're feeling better" responds the Doctor). There's a poignant moment when he calls for Susan - suddenly realising she has gone.
Hartnell even gets some fight action with Bennett at the climax in the Hall of Judgement.
The insectoid Koquillion costume is really quite effective. I'm not sure how many of the original viewers guessed that it was a disguised Bennett (Australian star Ray Barrett).
Ray Cusick is the designer. There is a very good model spaceship, though its studio interior version doesn't quite match in terms of scale. The Hall is simply achieved with prop pillars and black drapes - helped considerably due to some smoke and atmospheric lighting. 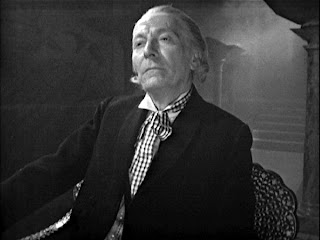 Episode endings for this story are:

Overall, a neat little story that achieves its purpose of getting the new companion off to a promising start, with a good mix of drama and humour.
Things you might like to know: