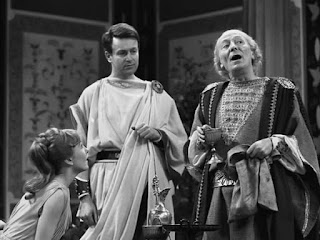 David Whitaker has left the programme but, to ease the transition, he and his replacement - Dennis Spooner - have commissioned stories from each other. We looked at Whitaker's piece last time.
Spooner has decided that his adventure will have a high comedy quotient. At this stage of the programme, the format is still being experimented with, and producer Verity Lambert is happy with this. She sees The Romans as a suitable vehicle for her friend Derek Francis, who has asked to have a role in the show. Someone else keen to have some humour in the programme is its star, and Hartnell clearly relishes the comedic aspects of the story. The comedy is mainly in the form of farce, with characters continually failing to meet each other as they move around the palace.
The idea of a story set in the time of the Romans has been kicking around since the preliminary discussions about the show. The idea usually mooted was a meeting with Julius Caesar on the occasion of his invasion of Britain in 54 BC.
Spooner decides instead to set his story in a period well known to the viewing public - Imperial Rome during the reign of Nero. Most people would have seen the 1951 epic Quo Vadis, in which Peter Ustinov portrays the Emperor.
The real Nero was born Lucius Domitius Ahenobarbus in December 37 AD at Antium. His mother, Agrippina The Younger, married the Emperor Claudius. She was the sister of Caligula, so you could see how that would work out. Claudius died after eating some mushrooms, generally accepted to have been poisoned by Agrippina so that her son could succeed him - and she gain power through him. He took on the name Nero Claudius Caesar Augustus Germanicus. Initially mother and son ruled together - there are coins bearing both their portraits, of equal size. Nero tired of his mother's ambition and meddling in his affairs, and had her killed in 59 AD. In 62 AD, he married Poppaea Sabina. 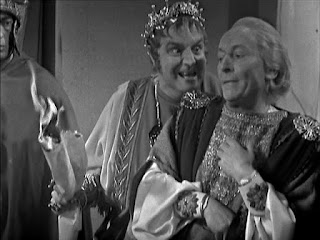 The Doctor and his companions arrive on the scene two years later. The story begins in a country villa which the the travellers take over for a month or so. It is stated that the owner is away on campaign in Gaul. There were no campaigns under way in 64 AD. Spooner also seems to mistake the Roman villa for the kind he might rent for a month in Tuscany. Villas were huge estates, usually with a farm, and were staffed with many slaves and freedmen all year round. The Doctor and Co. would not have the run of the place as shown here.
To split the regulars up, the Doctor goes off to visit Rome, taking Vicki with him. Left on their own at the villa, Ian and Barbara get abducted by slave traders. Slavery was big business in the Empire - the economy depended upon it. Slaves could be obtained from a number of sources, and it really wasn't necessary to kidnap people from the countryside close to Rome itself - especially the inhabitants of a rich villa who would be missed and whose abduction would have serious repercussions.
We've mentioned Quo Vadis, but there are a number of other big budget Roman movies which Spooner would have been thinking about. 1959 saw the release of Ben Hur, and in 1964 we had The Fall of the Roman Empire. Then there was The Robe, in 1953. The other place to see Romans at the cinema around this time was in the Biblical epics, such as King of Kings (1961).
All of these movies feature Christianity to a greater or lesser extent - and the same is true with The Romans. Major Domo Tavius will be revealed at the end to be a secret Christian. The early Christians did not use the crucifix as their symbol. They would more likely have used the fish symbol - the Greek word for fish forming an acronym for 'Jesus Christ, Son of God, Saviour'. Some of the Apostles had been fishermen, and Christ claimed to be "a fisher of men". 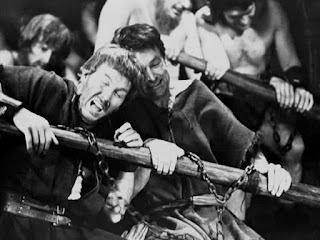 Peruse those movies mentioned above, and you will find other story elements which Spooner has incorporated. Ian is first sold off to be a galley slave - just like Judah ben-Hur. (By the way, forget the recent remake, and even the Chuck Heston version, and try to get hold of the 1925 silent version, with Ramon Navarro). Ian and new friend Delos (presumably of Greek descent) then get themselves sent off to prison, where they are selected to be trained as gladiators.
Now, I recently read a review of this story in which the reviewer bemoaned the fact that the arena wherein Ian and Delos are forced to fight each other looked nothing like the Colosseum. The Colosseum wasn't built until after Nero's death, as I'm sure you knew. It is clear watching the episode in question that the fight takes place in a small arena in the gladiator school.
The only Roman cliche Spooner hasn't been able to squeeze in is a chariot race.
I've talked about the movie references, but these all had literary forebears. Robert Graves' Claudius books end at the start of Nero's reign, but he looked to the classics for his references - mainly Suetonius' The Twelve Caesars, and Tacitus' Annals of Imperial Rome. 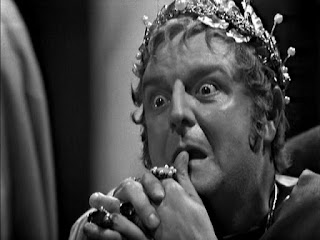 Onto the Great Fire then. Rome had suffered many destructive fires throughout its history. Augustus introduced the first fire brigade of sorts - the Vigiles Urbani. He built a massive, thick wall to protect his new Forum from the nearby overcrowded, lower class Subarra district as a form of fire wall. It can still be seen today. On the night of 18th / 19th July, 64 AD, a great fire broke out in storehouses between the Caelian and Palatine Hills. It was extremely dry and there was a strong wind which fanned the flames. It took 6 days for the flames to abate. The Romans has Nero deliberately starting the fire - inspired by the Doctor's accidental setting alight of his plans for a new Rome. He is upset that the Senate won't approve this. He is in the city, playing his lyre, as the fire breaks out.
There were rumours at the time that Nero caused the fire to be set, so that he could get land for the building of his new palace - the Domus Aurea, or Golden House. He was said to have watched the fire from a tower in the Gardens of Maecenas, on the Esquiline. Tacitus claims that he was away from Rome at the time, in Antium, and this is now generally accepted, and criticism is mainly that he failed to act on the disaster quickly and effectively. Part of his own new palace (the Domus Transitorium, designed to link the old palace on the Palatine with the Domus Aurea) had been destroyed in the blaze.
Wherever he was, he wasn't fiddling. He was an accomplished lyre player, and won many competitions at home and abroad - sometimes even when he didn't actually perform. 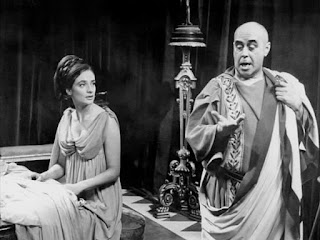 To avert rumour away from himself, Nero blamed the conflagration on the Christians, and so launched the first of many persecutions. The Romans were incredibly tolerant of other religions - usually incorporating local deities into their own pantheon. The problem with the Christians was that they, like the Jews, were monotheistic - at a time when Emperors were deified.
Nero lived only another four years, taking his own life at the age of 30 when threatened by a coup. Poppaea died just a year after the events of The Romans - kicked to death by Nero in a rage whilst she was pregnant. Nero went on to marry a boy named Sporus, whom he had castrated, as well as a freedman named Pythagorus. Nero dressed as the bride for this wedding.
We see a hapless servant named Tigellinus, who dies after drinking the poisoned wine prepared by Locusta. The real Tigellinus was commander of the Praetorian Guard, and outlived Nero. He switched sides too often during the Year of the Four Emperors, and met his end in 69 AD.
Locusta also survived Nero, being executed by the short-lived Emperor Galba along with all Nero's favourites in January 69 AD.
History 101 over for now. Next time, we head back off into outer space, and inspiration will come from a bit finger.
Posted by GerryD at 23:20