B is for... Briggs, Captain 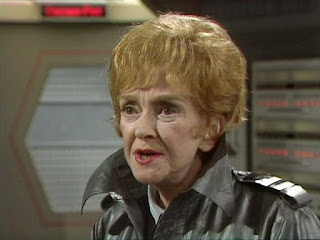 Commander of a 26th Century space freighter which was approaching Earth at a time of heightened security. Briggs was worried that delays would affect the crews' bonuses. The extra security was down to a forthcoming interplanetary conference. The Cybermen intended to destroy this as they suspected that it would lead to an alliance against them. Cybermen hid themselves on board the freighter, helped by security chief Ringway. A signal was beamed from the craft to trigger a powerful bomb, hidden in a cave system near the conference venue. When the bomb was defused by the Doctor, the Cyber-Leader activated a contingency plan. Briggs was informed of power fluctuations, as energy was diverted to reanimate a force of Cybermen concealed amongst the ship's cargo. Briggs found her vessel overrun by Cybermen, and she and the surviving crew were captured. They would be left on board as the freighter was deliberately crashed into the planet below. Adric's tampering with the Cyberman control device on the navigation systems caused the freighter to slip back through time - stabilising some 65 million years in the past. Briggs was freed by Commander Scott and his troopers, and they evacuated the ship in an escape pod - though Adric elected to remain behind. After the Cybermen had been defeated, the Doctor took Briggs and the other survivors back to their own time.