Story 142 - Revelation of the Daleks 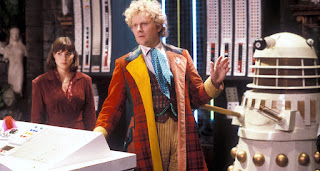 In which the Doctor learns of the death of an old friend - Professor Arthur Stengos - and decides to pay his respects on the planet Necros. This is home to the vast funerary complex Tranquil Repose. The Doctor is suspicious of the circumstances surrounding the death.
Many of the people interred here are actually in cryogenic suspension - awaiting the day when cures have been developed for their illnesses. Some of the clients can have news and music piped into their tombs by an Earth-music obsessed DJ. Overseeing everything is the Great Healer, who is never seen in public. Stengos' daughter Natasha, and her medic friend Grigory, break into the complex as she also has suspicions about her father's death. They discover that his tomb is empty. Exploring further, they come upon a laboratory where there is a tank of living human brains, and nearby is a transparent Dalek. Within are the remains of Arthur Stengos - mentally conditioned to turn him into a Dalek. He pleads for his daughter to kill him - which she does. She and Grigory are then captured by funeral attendants Takis and Lilt. The TARDIS has materialised outside the complex, and the Doctor and Peri make their way towards it on foot. They are attacked by a mutated humanoid. To save the Doctor, Peri strikes the man with a branch, and the blow proves fatal. Before he dies, he warns them about the Great Healer, who was responsible for his condition. The Great Healer is Davros. 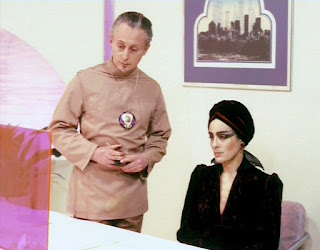 Near Tranquil Repose is the artificial food processing plant run by businesswoman Kara. She knows the Great Healer's true identity, and is plotting to assassinate him. Davros is using Tranquil Repose to create a new army of Daleks that are totally loyal to him. It is the waste products from his work that Kara uses to create her food product. Fed up with sharing profits with Davros, she has employed Orcini to kill him. He was once a member of the Grand Order of Oberon - an assassin guild - but now works on his own, accompanied by his loyal squire Bostock. To destroy the creator of the Daleks Orcini sees as an honourable act. Kara plans to double-cross him. He is given what he thinks is a transmitter that will call in a rescue vessel once his work is done - but it is really a powerful bomb.
The Doctor and Peri finally reach Tranquil Repose, and the Doctor is shocked to see a funerary monument erected to himself, in his current incarnation. This collapses on top of him. It proves to be a light weight mock-up - designed as a cruel joke. Peri goes off to meet the DJ, but the Doctor is captured by the Daleks and finds himself locked up with Natasha and Grigory. 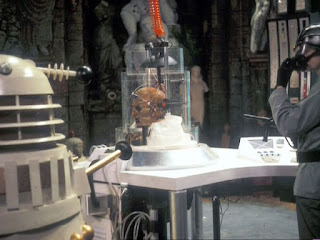 Soon after Orcini and Bostock have set off for Tranquil Repose, the Daleks arrive at the food processing plant. Kara's sycophantic assistant Vogel is exterminated, and Kara is forced to accompany the Daleks to meet Davros. Orcini frees the captives then goes to the lower levels to confront Davros. He finds him totally encased in a life support unit. He and Bostock shoot and destroy him. However, this was just a diversion. Davros appears, still seated in his wheel-chair and now able to fire electric bolts from his hand. He blows off Orcini's artificial leg. Bostock shoots off Davros' hand before he is shot down by Daleks. When Kara reveals her treachery with the bomb, Orcini stabs and kills her. The DJ is killed after converting a weapon to fire concentrated rock & roll music - compressed sound waves - that destroy some of the Daleks and Peri is captured. Natasha and Grigory are sent to destroy the laboratory but are exterminated by a Dalek sentinel. Takis and Lilt have been secretly plotting to oust Davros. They have contacted Skaro and a squad of Daleks loyal to the Dalek Supreme soon arrive on Necros. They take Davros into custody - to be taken back to Skaro to face trial. They refuse to believe his claims that the Doctor is their arch-enemy. Orcini elects to sacrifice himself to blow up Tranquil Repose before the Daleks can remove Davros in their spaceship. The Doctor has the complex evacuated but Orcini detonates the bomb too late to stop the departing Dalek ship. With both industries on Necros ruined in the same day, the Doctor recommends to Takis and Lilt the cultivation of a native plant that can produce a protein substitute. 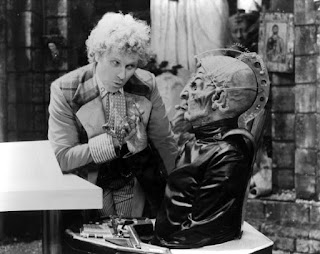 This two part story was written by Eric Saward, and broadcast between 23rd and 30th March, 1985. It marks the ending of Season 22, and would be the last new Doctor Who story for 18 months, as the programme was put on hiatus. It is Eric Saward's last credited script. It is also the last story of the classic series to be directed by Graeme Harper.
The BBC had decided to rest the programme following a number of concerns about violence, as well as the current interpretation of the Doctor. The experiment to create a darker Doctor was not deemed to be a successful one. It was also claimed that the budget for the next series was needed for other things. It is widely accepted that the BBC had actually cancelled the show, but public opinion forced them to claim it was only being rested. The first episode of the already planned Season 23 would have been "The Nightmare Fair" by former producer Graham Williams, set in Blackpool and featuring the return of the Celestial Toymaker. As such, the Doctor tells Peri at the very end of Part Two that he is going to take her to "B - ". Eventually, when the show returned, they would be going to somewhere beginning with "R", and the planned Season 23 stories were all ditched.
Much of Revelation of the Daleks is taken up by a sub-plot - which I decided to omit from the summary above - regarding some of the characters who work in Tranquil Repose. There's the vain womanising mortician Mr Jobel, and the dowdy Tasambeker who carries an unrequited torch for him. Takis and Lilt also have more to do than the summary might suggest. The fact is that very little of this really inter-connects with the main Davros / Kara / Orcini plot.
Sadly, nor does the Doctor - or even the Daleks.
Back when I reviewed Vengeance on Varos I said it was the best story for the Sixth Doctor - but not the best Sixth Doctor story. This is the best story of the Colin Baker era, but he and Nicola Bryant might just as well not have bothered turning up. Eric Saward obviously finds everyone else far more interesting. The Doctor and Peri haven't even reached the plot by the end of Part One, and have little to do in Part Two. It is easy to envisage a version of this story that is entirely Doctor-free. 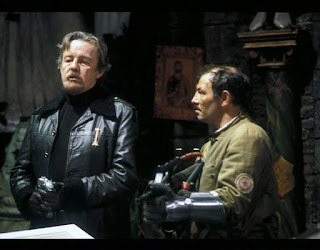 That sub-plot about the goings-on in the funerary complex is obviously inspired by Evelyn Waugh's The Loved One. This is a darkly comic look at the American funeral parlour industry in pre-war Hollywood. The book has a Mr Joyboy and Miss Thanatagenos - obvious sources for Jobel and Tasambeker.
"Darkly comic" might be a good description for Revelation of the Daleks. Terry Molloy's Davros is his best performance in the role, with a good deal of graveyard humour. William Gaunt's Orcini only kills people he thinks deserve to die, and he gives his fees to charity. John Ogwen's Bostock is said to smell like rotting flesh, but he is a good squire. He and Orcini are patently inspired by Don Quixote and Sancho Panza, though this only emerged in rehearsals. Kara (Eleanor Bron) and Vogel (Hugh Walters) make for a comically camp couple, whilst Takis and Lilt (Trevor Cooper and Colin Spaull) are a sadistic Laurel & Hardy.
A few of these names will be familiar from other stories. Bron was seen alongside John Cleese in City of Death. Hugh Walters was Runcible in The Deadly Assassin. Trevor Cooper and Colin Spaull have both been in the new series - the former in Robot of Sherwood, and the latter in Rise of the Cybermen / Age of Steel. Spaull was cast in that story by the director of this one - the excellent Graeme Harper.
Mr Jobel is Clive Swift (Mr Copper from Voyage of the Damned). Tasambeker is Jenny Tomasin. Natasha is Bridget Lynch-Blosse, and Grigory is Stephen Flynn. The DJ is Alexei Sayle - more on him below. Another actor who has appeared more than once in the show plays Stengos - Alec Linstead. He was Sgt. Osgood in The Daemons, and Jellicoe in Robot.
Episode endings are: 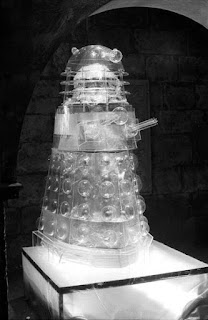 Overall, brilliant direction, a great cast (including a couple of roles that might not have worked but did) and lots of pitch black humour. My favourite Saward script. Shame he couldn't have found a role for the regulars in it.
Things you might like to know: