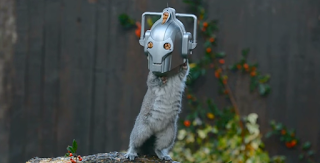 Time for a look at all the Cyber-related stuff that didn't quite fit into the main series of posts.
First, let's take a look at a couple of the less successful Cyber-Conversions.
Above we see a Cyber-Squirrel. Extremely agile, and useful for invading arboreal planets. However, they were easily distracted if you flashed them your nuts. 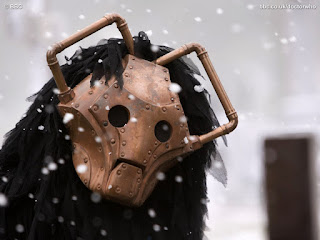 Then we have the Cybershades. Rather than converting human beings, these were created using stuntmen. 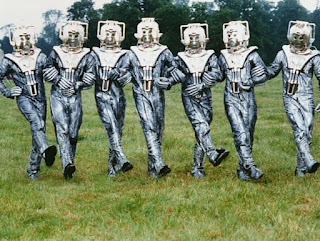 Cyber-Dancing. There is nothing a Cyberman likes better than having a bit of a knees-up. Above, we see some of the 1980's models launching into a high kick routine, to the accompaniment of Frankie Vaughn's "Give Me The Moonlight".
They are also partial to a bit of Disco. 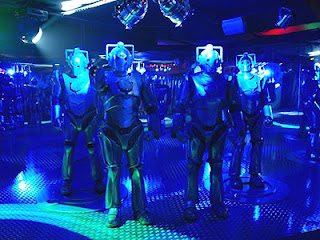 The Cyber-Controller had to pull out of an appearance on Strictly Come Dancing last year (an allergy to the gold lame costume), whilst the Cyber-Leader actually won Dancing With The Stars in 2012. 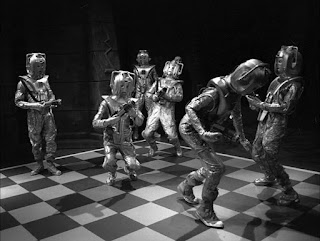 Here's their break-dancing routine from Opportunity Knocks in 1978. Five years before their time, they scraped second last place. 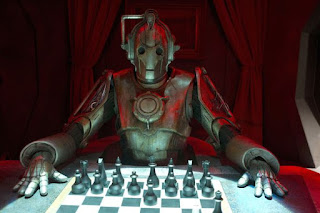 Their love of chess is known throughout the Nine Planets, but they are also big fans of the jigsaw.

These coldly logical creatures preferred single colour pictures. In the image above we see the ever popular white one. 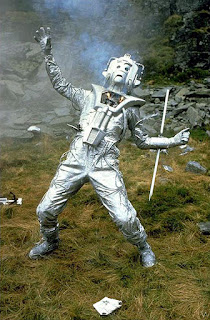 Track and field sports can be dangerous. Here we see a Cyberman who stood a bit too close to the javelin competition. Winning a sporting event would generally prove fatal to the victor - until they decided to ban gold medals.
The Second Doctor once stumbled upon a Cyberman downhill ski race, which was immortalised in comic form. 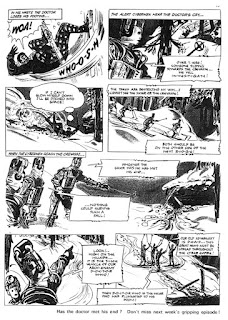 Note the obvious jubilation of the coldly logical creatures when they think the Doctor has fallen off a cliff. Later, they will simply clench a fist and intone "Excellent!" on these occasions. 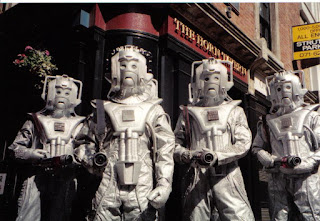 A little known fact about the Cybermen is that they do not need to eat or drink - apart from Gin.
Here we see members of the 13th Cyber-Legion about to embark on the Circle Line Pub Crawl. It'll all end in tears... 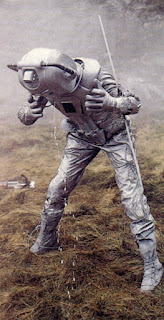 4 hours later, and this one is already feeling a little worse for wear. Unfortunately, he has also wandered a bit too close to yet another javelin contest. Double whammy. 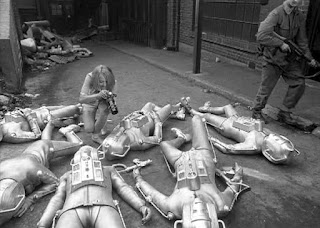 The following morning, passing UNIT soldiers find the entire Legion comatose. Lovely leggy Isobel Watkins, of "The Daily Trash", gets the idea for a shocking expose on the growing problem of Cyber-Drunkeness. (Apparently the 2016 Christmas Special will see the Cyberiad implementing a limit on gin-drinking - which triggers a Cyber Civil War). 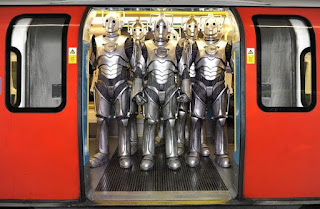 I wrote a whole post on Cyberships, but when you have the Doctor as your Arch-En-Em-Y, you can quite often find yourself having to make alternative arrangements to get back home to Telos after a failed invasion attempt. In the image above, we see the survivors of the 14th Cyber-Legion taking the Northern Line to Colindale, where they had hidden their escape ship in the Burger King car park. (Little do they know that it has been clamped, and they will need to fork out £80 to release it). 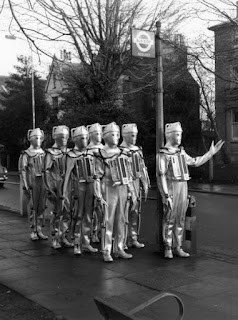 The 2nd Cyber-Legion had invaded South London, which has few tube lines, so they had to get the bus to their escape ship, hidden in the Ikea car park in Croydon. (Little did they know that it had been clamped, and they had to fork out £2.6s.8d to release it). The bus was quite full, so a couple of them had to phone for a taxi.

This one below wishes he had gone to the Gents before they set off for Croydon. 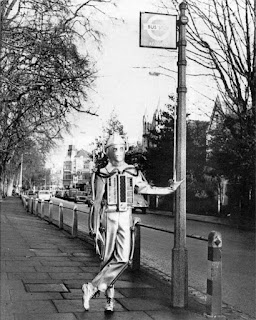 It has recently been announced that the 22nd Cyber-Legion has won the contract from Mayor of London Boris Johnson to delete all members of the RMT Union in order to put an end to the thrice yearly tube strikes. 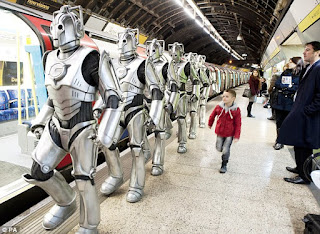 Fare dodgers, buskers and late night drunks will also be deleted. And people who play their i-pods too loud. That little brat in red taking the mick had better watch out as well. 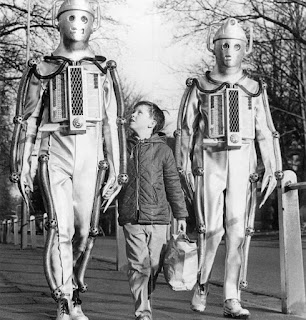 Here we see another brat being marched off for maximum deletion, having dropped an empty crisp packet on a Jubilee Line train. His friend has already been killed by Cyber-Chop (the severed head is in the bag). 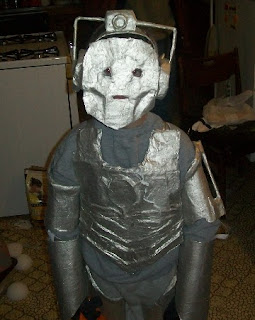 Another young criminal is converted. 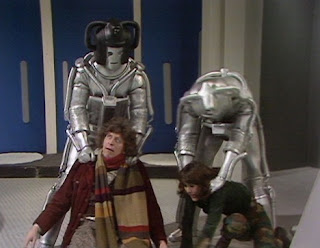 The news is full of stories about Cyber-Criminals. Above is a typical example of the sort of cyber-bullying that is plaguing our schools and space stations. This unlucky couple had their wallets and wrist watches stolen, as well as a bag of jelly babies and a yoyo. The gentleman sustained considerable, debilitating shoulder injuries, which aggravated a recent broken collar bone. The culprits have never been caught.

And that's it for now. No doubt there are far more things to say about the Cybermen, but I really can't be bothered at this precise moment in time.
One thing I will leave you with. The threat from the Cybermen is no distant possibility. Something that might never materialise. The Cybermen are already here - hidden in plain sight... 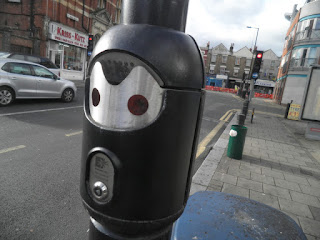