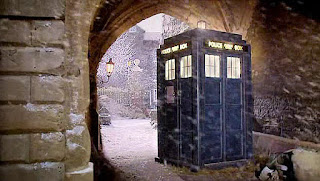 This covers the David Tennant Specials, plus two further adventures we witnessed that took place during this period. Only 7 stories, but quite a bit of TARDIS action - though much of it is reserved for Ten's swansong.

Journey 501: Chiswick, London, 2009, to Central London, 24th December 1851.
The TARDIS materialises somewhere in the City, near one of the street markets and close to the Thames. 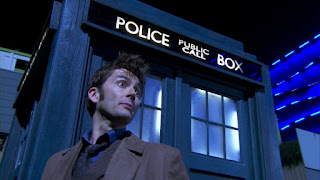 Journey 502: London, 25th December 1851, to London, 2010.
The Doctor parks the TARDIS in the grounds of Buckingham Palace - something he suggests he has done more than once before. UNIT have it transported to the road tunnel where the No.200 bus had vanished with the Doctor on board. 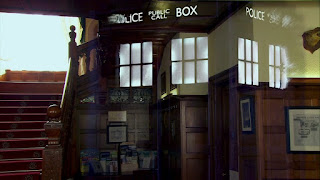 Journey 503: London 2010 to location unknown, 2010.
The TARDIS tries to materialise in Ealing but some power prevents it from doing so. It eventually arrives at the hotel where Sarah Jane Smith is about to be married. This is out in the country, so the exact location isn't identifiable. The Trickster strands the Doctor, along with Luke, Clyde, Rani and K9 in a separate time zone to where the TARDIS is. It is located in the hotel's reception area. 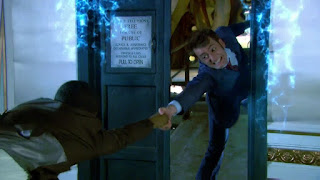 Journey 504: Hotel in England, 2010 - reception area to function room.
The TARDIS breaks into the time zone where the Doctor can regain access. It leaves before the others can join him - and Clyde gets dosed with Artron Energy when he touches it. 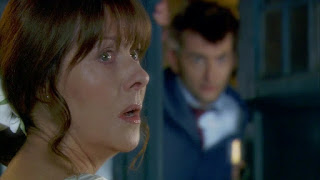 Journey 505: Hotel in England, 2010 - function room.
With the Trickster vanquished once more, the TARDIS materialises fully in the function room back in normal time, where Sarah has been left broken-hearted. 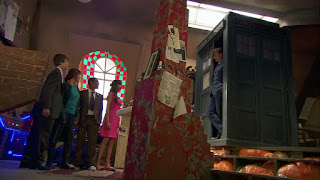 Journey 506: Hotel to Ealing, London, 2010.
The TARDIS travels to Sarah Jane's attic. Luke, Clyde and Rani get to have a look around the console room - but are banned from taking a trip. 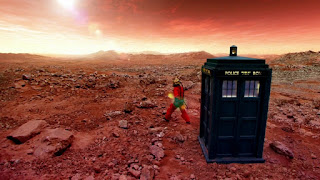 Journey 507: Ealing, London, 2010, to Mars, 21st November, 2059.
The TARDIS materialises on Mars, a short walk from Bowie Base One - the first manned station on the planet. The Doctor is shocked to learn of the date - as today is the day that the base is destroyed along with all its occupants. 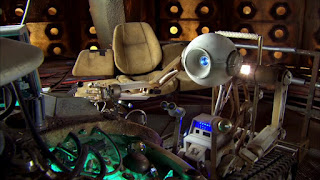 Journey 508: Mars - surface to Bowie Base One - 21st November 2059.
The Doctor sends the robot Gadget to bring the TARDIS into the base. 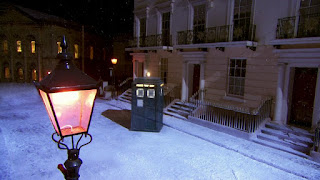 Journey 509: Mars to Earth, 21st November 2059.
Presumably somewhere in England - possibly London. The Doctor has meddled with a fixed point in time by saving three of the Bowie Base crew. Adelaide Brooke ensures future history will not be altered by committing suicide. 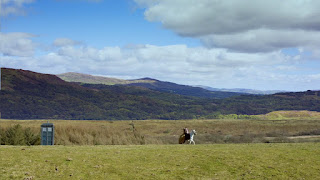 Journey 510: England, 2059, to England, 1562.
The Doctor goes on a picnic with the young Queen Elizabeth, which is rudely interrupted when their horse proves to be a disguised Zygon. The location is unspecified but it can't be far from London. 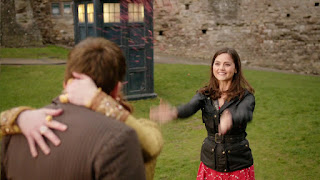 Presumably the TARDIS is moved to the Tower of London by the Queen's guards, as it is there when the Doctor and Elizabeth get married. 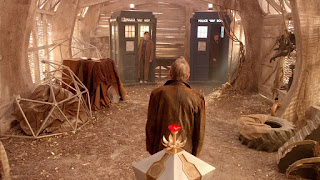 Journey 511: London, 1562, to Gallifrey, date unknown.
The Tenth Doctor joins the Eleventh on Gallifrey, at the barn where the War Doctor is planning to use The Moment. 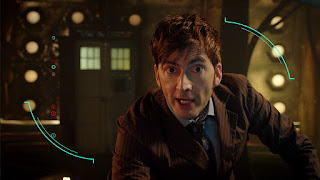 Journey 512: Gallifrey to near orbit, date unknown.
The Tenth joins all of the other Doctors in sending Gallifrey into a pocket universe to evade destruction by the Daleks. 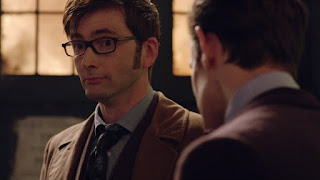 Journey 513: Gallifrey orbit, date unknown, to London, 2013.
The TARDIS travels to the Undergallery at the National Gallery, Trafalgar Square, where the three Doctors make their farewells. 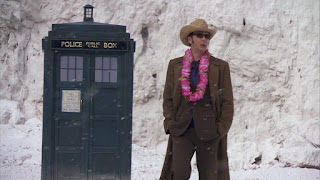 Journey 514: Undergallery, London, 2013 to the Ood-Sphere, 43rd Century.
The Doctor lists a number of activities he has got up to since Ood Sigma had appeared to him in London, 2059. Only marrying Queen Elizabeth is seen. He may even be joking about some of these unseen travels. Ood Sigma states that a century has passed since the Doctor and Donna visited. 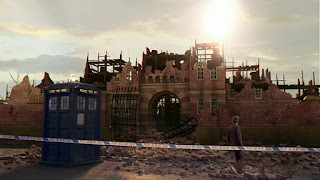 Journey 515: Odd-Sphere, 43rd Century, to London 24th December 2010.
The TARDIS arrives at the site of the prison where the Master has been reborn but it is far too late to stop him. 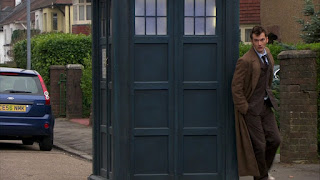 Journey 516: London - Broadfell Prison to Chiswick, 25th December, 2010.
The Doctor goes to the street where the Nobles live to meet with Wilf. 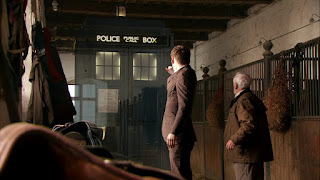 Journey 517: Chiswick to countryside near London, 25th December, 2010.
The Doctor and Wilf travel to the mansion belonging to millionaire Joshua Naismith. The Doctor hides the ship by moving it into a separate pocket of time, so that it won't fall into the Master's hands. 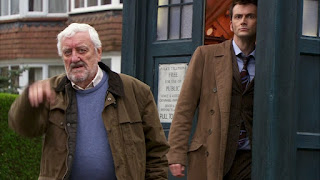 Journey 518: Naismith Mansion to Chiswick, 26th December 2010.
The dying Doctor takes Wilf back home - promising they will meet one last time before the end. 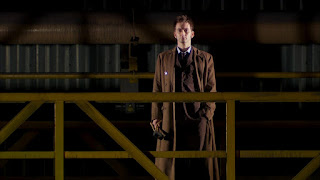 Journey 519: Chiswick to unknown location, England, 2011.
The Doctor saves the now-married Mickey and Martha from a Sontaran at an unknown location. Later, the Eleventh Doctor will reveal that he visited all of his companions at this time - though they were not always aware of it (Jo Jones wasn't). 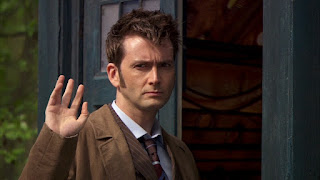 Journey 520: Unknown location, England, to Ealing, London, 2011.
The Doctor saves Luke Smith from being run over by a car, and bids a silent farewell to Sarah Jane Smith. 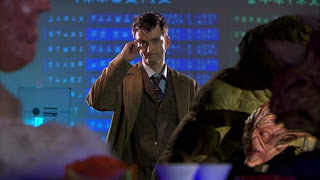 Journey 521: Ealing, 2011, to location unknown, date unknown.
The Doctor travels to a bar somewhere in space, where he sets Captain Jack up on a date with Midshipman Alonso Frame. Unless young Mr Frame can travel in time, this must be around 2011. Jack was seen to leave Earth after the death of his grandson and the break-up of Torchwood. 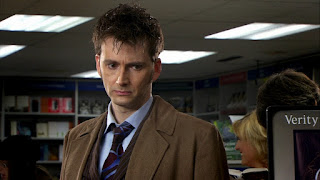 Journey 522: Date and location unknown to England, 2011.
The Doctor goes to a book signing by Verity Newman - great grand-daughter of Joan Redfern. Her book tells of Joan's encounter with a time-traveller in 1913. 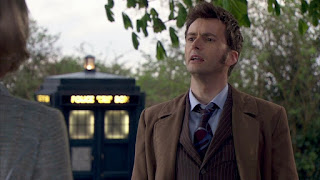 Journey 523: England - location unknown to church, location unknown, 2011.
An unseen journey is mentioned - as the Doctor went back and met Geoff Noble and borrowed £1 from him. Donna and Shaun Temple have just got married. The Doctor says farewell to Wilf and Sylvia Noble. 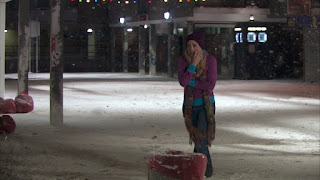 Journey 524: England - location unknown - 2011, to Powell Estate, London, 1st January 2005.
The Doctor's final farewell trip takes him back to the Powell Estate, at the beginning of the year when he will first encounter Rose Tyler. He sees her, but ensures she does not get a good look at him. 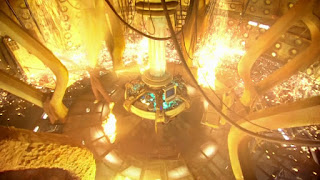 Journey 525: Powell Estate, London, to Earth orbit, 1996.
The Tenth Doctor's final journey. He regenerates, the process wrecking the ship.
Posted by GerryD at 22:30