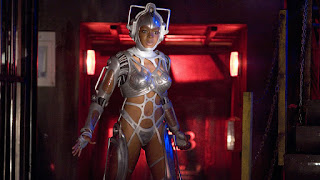 TW: Cyberwoman (2006).
There was one Cyber-survivor from the Battle of Canary Wharf - Ianto Jones' girlfriend Lisa Hallett. He deliberately ingratiated himself with Captain Jack Harkness in order to get employment at Torchwood Cardiff. Once in place, he smuggled Lisa into the lower levels, and set about finding a way of returning her to normal. For Lisa had been partially converted into a Cyberman. Much of her body had been converted, and her mind had been conditioned. As such, she even killed the surgeon whom Ianto had employed to save her. Lisa spent much of her time dormant, lying in a Cyber-Conversion unit. When this began to drain the power from the Hub, it alerted the others to what Ianto was up to. Lisa broke out and ran amok within the Hub. At one point she killed Jack with an electrical discharge, but of course he could come back to life. Throwing BBQ sauce over her made her a target for the Pterosaur which lived in the Hub. Eventually, Lisa had her brain transplanted into a woman who had come to deliver pizza. Ianto had been ordered to destroy her, but couldn't bring himself to do it. Lisa was shot dead by the rest of the team.
It is claimed that the Cybermen started to make such conversions once the Daleks attacked during the battle, which seems odd as simply inserting the brain directly into a Cyber-form was such a speedy process. Perhaps they had run out of complete bodies.
One also has to wonder how Ianto got her and the conversion unit out of the Tower without anyone spotting them, and where did he keep them before getting his job in Cardiff. 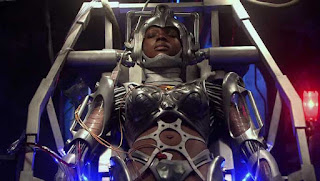