Story 133 - Resurrection of the Daleks 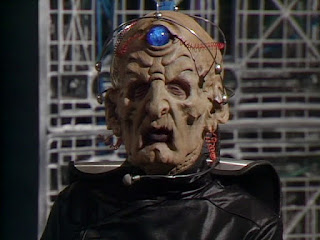 In which the TARDIS has been caught in a time corridor and is hurtling out of control. The Doctor is able to manoeuvre the ship out of the corridor but is continuing to travel parallel to it so they can discover where it leads to. Their destination proves to be the south bank of the Thames, near Tower Bridge. It is 1984. This area is full of derelict warehouses. Prior to their arrival, a group of strangely dressed humans had appeared out of nowhere - followed soon after by three men wearing police uniforms. The policemen shoot dead the others, as well as an unfortunate onlooker, before vanishing. However, two of the original group have escaped - the cowardly Stien and his friend Galloway. Galloway is killed soon after. The Doctor, Tegan and Turlough find Stien, and learn he has come from the future. He has escaped from the Daleks.
In deep space, in the far future, the crew of a prison station come under attack. The prison is antiquated and its defences are soon destroyed. There is only one prisoner on board, but an attempt to kill him before their attackers can board fails. A new young crew member named Mercer finds himself the most senior officer left alive, along with chief medic Styles and a handful of others. They try to stop their attackers from boarding. These prove to be Daleks. The first assault fails, but then humans wearing Dalek-style helmets use a toxic gas to kill most of the defenders. A second assault sees the Daleks and these human mercenaries access the prison. 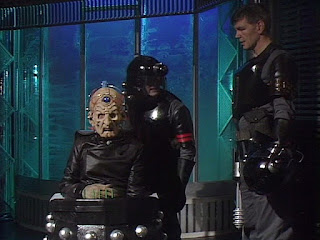 In command of the mercenary force is Lytton, an alien from Riftan 5. He leads a party to where the prisoner is being held in cryogenic suspension. This is Davros. He has been captive for 80 years, ever since he was captured by the Doctor on Skaro. He is reanimated. Lytton and the Dalek Supreme, who is on the attacking craft, want him to leave with them immediately, but Davros refuses. He maintains that he may need to re-enter cryogenic suspension at any time, should his life support systems fail. He discovers that the Daleks have been defeated by the Movellans in their long-running war - after the Movellans developed a virus that attacks their insulation. The Daleks want Davros to find a defence against this virus. Davros insists on a lab being set up on the prison station.
In 1984, the Doctor and his companions have encountered an army bomb disposal squad led by Colonel Archer, who is accompanied by a scientist named Laird. Strange blue cylinders have been found in one of the warehouses which were at first thought to be WW2 bombs. These are actually containers of the Movellan virus, hidden here by the Daleks at the end of their time corridor - which stretches from London 1984 to their ship in the far future. It was designed to trap the Doctor. Exploring on his own, Turlough stumbles into the corridor and finds himself on the Dalek ship. He passes through to the prison station where he meets Styles and Mercer. The Doctor and Stien follow Turlough but once they have reached the Dalek ship it is revealed that Stien is really one of Lytton's mercenaries. He is a Replicant - a product of Dalek genetic engineering. 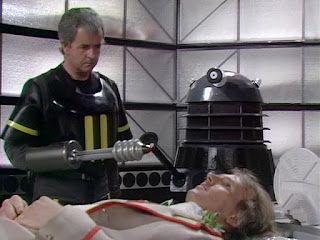 The Daleks intend to drain the Doctor's memories and implant them into a Replicant, which will be sent to Gallifrey to assassinate the High Council of Time Lords. There are Replicants of Tegan and Turlough prepared also. Stien's original memories begin to surface, and the Doctor is able to help him control the Dalek conditioning - at least temporarily. He frees him. Learning of Davros' presence on the station, the Doctor decides that he has no course open to him but to kill him. Styles, meanwhile, has managed to get to the station's self-destruct mechanism, but is struggling to work out how it operates. When Lytton discovers this, he sends a squad to stop her. Davros has plans of his own. He knows that the Daleks will turn on him as soon as he has helped them, so he begins to recondition a number of mercenaries and Daleks to obey only him. They will fetch the Movellan virus from 20th Century Earth, which he can then use as a weapon.
In London, Tegan and Professor Laird find themselves prisoners when the Daleks replace the bomb disposal squad with Replicants. Styles is killed before she can complete the final arming sequence on the self-destruct. Mercer is killed when Stien's conditioning slips. The Doctor finds that, face to face, he cannot bring himself to kill Davros.
A conflict breaks out between the Daleks and mercenaries loyal to the Supreme, and those loyal to Davros. The Doctor decides to use the virus to destroy both factions. He and his companions return to 20th Century Earth, whilst a wounded Stien goes to the self-destruct chamber.
Before he can flee the station in an escape pod, Davros discovers that the Movellan virus affects him as well...
The Daleks and mercenaries are destroyed on Earth - either killing each other or being killed by the virus which the Doctor releases. Lytton manages to escape, along with his two colleagues who are still dressed as policemen. They vanish into the city. Stien destroys the station, along with the Dalek ship which was still docked alongside.
Sickened by all of the death she has just witnessed, Tegan decides to leave the TARDIS. 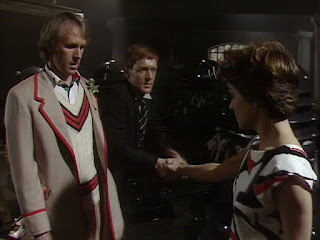 This two part adventure was written by Eric Saward, and was broadcast between 8th and 15th February, 1984. It is significant for the return of the Daleks and Davros, after a 5 year absence, and for writing out Janet Fielding as Tegan.
The story was broadcast as two 45 minute episodes rather than the usual 4 x 25 minutes due to the BBC coverage of that year's Winter Olympics.
A story called 'Warhead' or 'The Return' featuring the Daleks had been planned for the previous season, but industrial action had resulted in that having to be postponed. It was always going to be written by script editor Saward, who had arranged that he would be able to write it in a gap between contracts - to get round the ban on script editors commissioning themselves. This is the first Dalek story not to be written by Terry Nation since Day of the Daleks back in 1972. Nation had to approve the script, and he insisted that Davros be included - which Saward intended anyway. He vetoed Davros' death and the inclusion of the Emperor Dalek.
There are a couple of nods to earlier Dalek serials in the names of the characters Styles and Galloway, and it links directly back to the last story (Destiny of the Daleks) - with references to Davros' capture and the Movellans.
Had the BBC strikes in 1983 not intervened, Michael Wisher was lined up to reprise the role of Davros. As it was, he was now touring with a play in Australia, so noted radio actor Terry Molloy was brought on board. He would play Davros through to the end of the Classic Series, as well as on a number of subsequent audio adventures. A totally new mask was created for him, considerably different from Wisher's one. 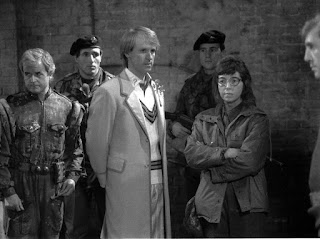 Joining him in the cast were Rula Lenska (best known for Rock Follies and a number of Euston film series) as Styles, and Likely Lad Rodney Bewes as Stien. Considering she is one of the two principal guest artistes, Lenska has no scenes with Peter Davison's Doctor. Playing Lytton in the first of two appearances in the programme is Maurice Colborne. Mercer is played by Jim Findlay, Archer is Del Henney, and Prof. Laird is Playschool stalwart Chloe Ashcroft. In a minor role, playing Kiston - a mercenary who is taken over by Davros - is Leslie Grantham. As a young man in the army he had been imprisoned after killing a taxi driver whilst stationed in Germany. Louise Jameson had taught drama to prisoners, and Grantham was one of her pupils. He would soon find fame and notoriety of a different sort as pub landlord "Dirty" Den Watts in Eastenders - who gets a mention in The Army of Ghosts.
Episode endings are: 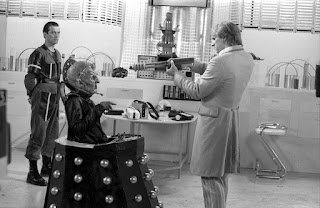 Overall, this story is a bit of a mess. Popular, but still a bit of a mess. There are too many disconnected plot points going on - as thought two stories are running side by side. Many of the major characters never interact. The whole "Replicant Doctor will assassinate the High Council" is just one sub-plot too many - though it does allow us a nice archive clip-fest of old companions. It is pretty violent as well.
Things you might like to know:
Posted by GerryD at 01:10