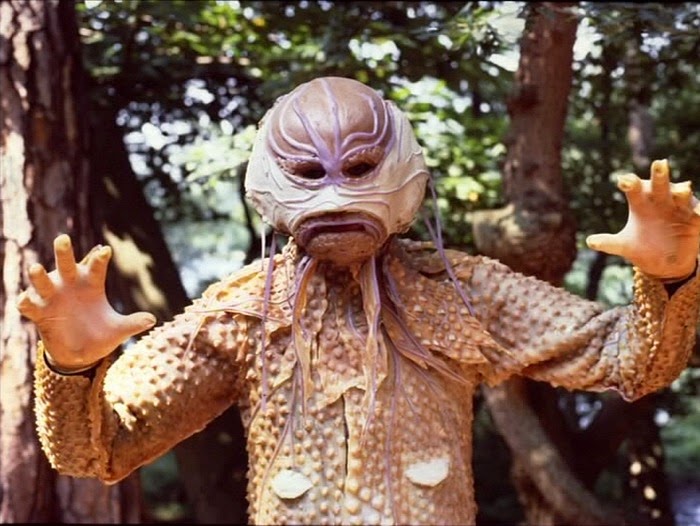 In which the Doctor receives word that he must return Romana to Gallifrey. She ought to have gone home after the completion of the Key to Time mission. The Doctor sets the co-ordinates, but the TARDIS then passes through a CVE - Charged Vacuum Emboidment. This is a portal to another universe - in this case the pocket universe known as E-Space or Exospace. The Doctor is not aware of this initially, and the ship materialises at the programmed co-ordinates. Instead of the outer region of Gallifrey, however, they have arrived on the verdant planet Alzarius. The Doctor quickly realises what has happened. Alzarius is home to a colony of people from the planet Terradon, who live in and around their vast Starliner craft. They fear a time called "Mistfall" when the atmosphere becomes poisonous, and they have to retreat to the safety of the Starliner. The ship crash-landed here some time ago, and the people are preparing for the day when they can finally return to Terradon. Some of the younger members have rebelled against their society and live independently as Outlers. They are led by Varsh. His younger brother, Adric, wants to join. To prove himself, he agrees to steal some river-fruit. He is caught by one of the Deciders - Draith. Three Deciders lead the colony. "Mistfall" suddenly begins, and Adric sees Draith pulled under the water. His dying words are that Adric should inform scientist Dexeter that their people have gone "full circle". Draith  had earlier become concerned by some of Dexeter's findings - something he had found in some of the fruit. 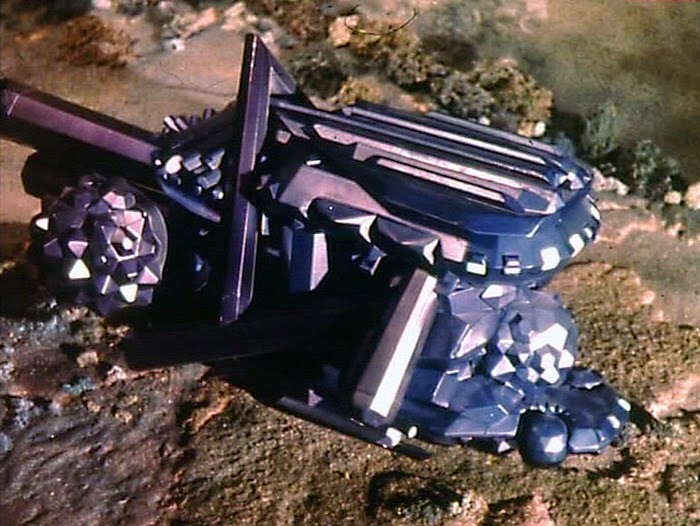 As the people rush back to the Starliner before it is sealed, the Doctor and K9 witness reptilian bipedal creatures emerge from the marshes. Adric finds his way to the TARDIS. The Doctor decides to go to the Starliner. He breaks in, and is followed by an inquisitive young Marshman. Adric wants to find his brother and so Romana gives him a device that will locate the TARDIS again. Unable to go to the Starliner, Varsh decides that they must seize the TARDIS instead. The Marshmen manhandle the ship, with Romana and the Outlers still aboard, to the cave where the young people had been living. Their stock of river-fruit bursts open and large spiders emerge. One of these bites Romana. Both the Doctor and the Marshchild have been captured. The Doctor meets the Deciders - Nefred, Garif and Login. Login has just joined them - to  replace the missing Draith. Login's daughter is one of Varsh's group. The Marshchild has been given to Dexeter to experiment upon. It escapes and kills the scientist, before accidentally electrocuting itself. The Doctor is curious why the colonists continually repair and replace perfectly good components, and starts to wonder just how long the Starliner has been here. Adric manages to activate the TARDIS and it materialises in the Starliner. Infected by an alien poison, Romana leads the Marshmen on an attack on the vessel - helping them to break in. They seem to have a compulsion to get onboard. 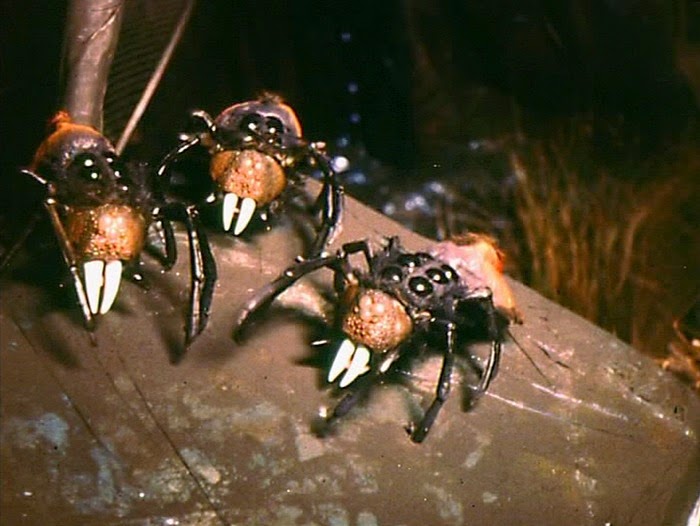 The Doctor examines Dexeter's work and makes a remarkable discovery. The Terradonians, the spiders, and the Marshmen all share the same genetic code. He begins to see the meaning behind Draith's last words. He succeeds in formulating an antidote to counter Romana's infection. Pure oxygen is uncomfortable to the Marshmen and it is used to force them out of the ship. Varsh is killed during the fight, as is Nefred. The dying Decider informs his colleagues that they can never go home to Terradon, as they never came from there in the first place. The original crew died centuries ago, and ever since then evolution on Alzarius has gone round in circles. The reason that the Starliner is continually repaired is that the vital take-off instructions were destroyed. No-one knows how to begin the process. The Doctor shows Login and Garif how to do this. The Alzarians take off in search of Terradon, to hopefully settle there. The Doctor, Romana and K9 must try to find another CVE in order to escape back into their own universe. Adric has left them a present - an image translator which works with the negative co-ordinates in E-Space. 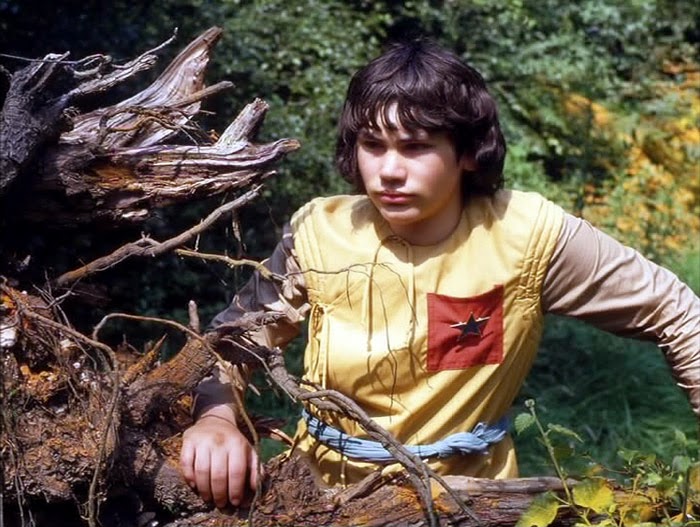 This four part adventure was written by Andrew Smith, and was broadcast between 25th October and 15th November, 1980.
Smith had submitted story ideas for the programme before, and had received some positive feedback from then script editor Anthony Read. Christopher Bidmead was impressed by Smith's latest idea - "The Planet That Slept" and invited him in for a meeting. He was surprised to find that the writer was still in his teens. He celebrated his 18th birthday on a visit to Black Park for the location shoot of his story.
Full Circle launches a three story arc - known as the E-Space Trilogy. This would see the writing out of Romana and of K9, and the introduction of a new companion. Adric was originally envisaged as a sort of "Artful Dodger" character - something which never really materialised on screen. He's a bit light-fingered only in his opening story.
The role went to Matthew Waterhouse, who was working as a clerk at the BBC at the time and who had very little acting experience. A lot of scurrilous things have been said about how he came to be cast, but he was auditioned by JNT, Barry Letts, and director Peter Grimwade, and all agreed he was the best person seen. We know of one other person who was auditioned - Bernard Padden. He was cast instead as Tylos, one of the Outlers. Waterhouse was a fan of the programme - even having a letter published in Doctor Who Weekly, written before the first issue had even been published. A lot of publicity at the time concentrated both on him and Andrew Smith - both young fans fulfilling their dream of working on the programme.
The story can be quite complex at times, as we are drip fed information about the nature of evolution on Alzarius, but there is also a traditional monster to keep younger viewers happy. The Marshmen are clearly inspired by The Creature From The Black Lagoon. There are also some impressive clockwork spiders. 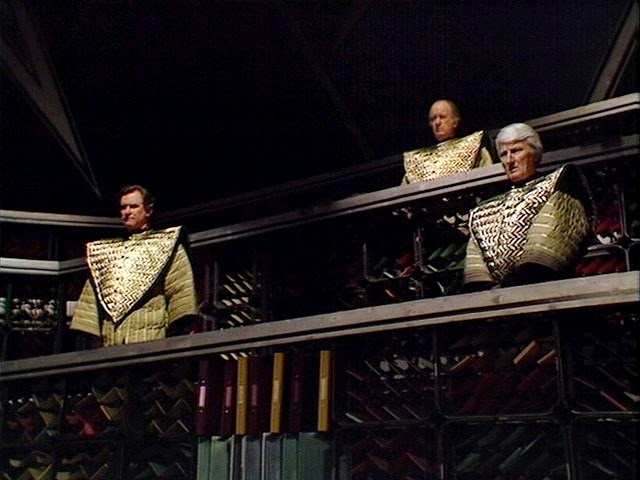 The impressive cast includes George Baker as Login, Alan Rowe as Garif, and James Bree as Nefred. Bree had appeared as the Security Chief in The War Games, and this was Rowe's fourth - and final -appearance in the show. Varsh is played by Richard Willis. It's such a pity that the production team opted for the wrong brother... Willis, who had starred alongside Patrick Troughton in The Feathered Serpent, would be married to Kate (The Rani) O'Mara for a time. Draith is Leonard Maguire, and Dexeter is Tony Calvin.
Episode endings are: 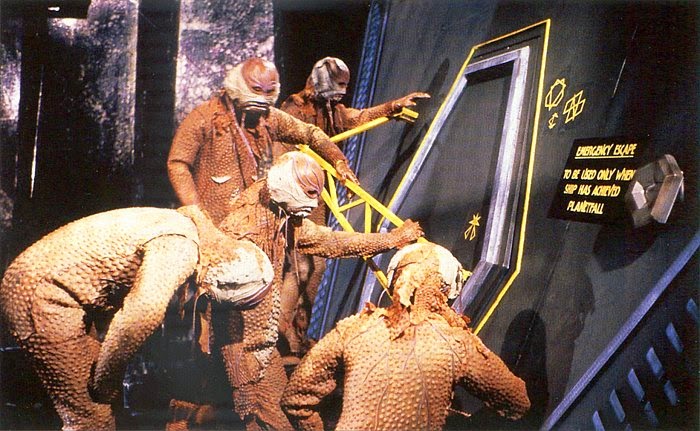 Overall, a very good story with a lot of interesting science. There's a mystery about the life on Alzarius which we get to work out alongside the Doctor, rather than simply have him tell us what's going on. The first story of the season that really feels like a break from the previous regime. Even the title is a break with tradition. The JNT era will generally avoid the "Doctor Who and the Something of Something" type of title.
Things you might like to know:
Posted by GerryD at 01:39