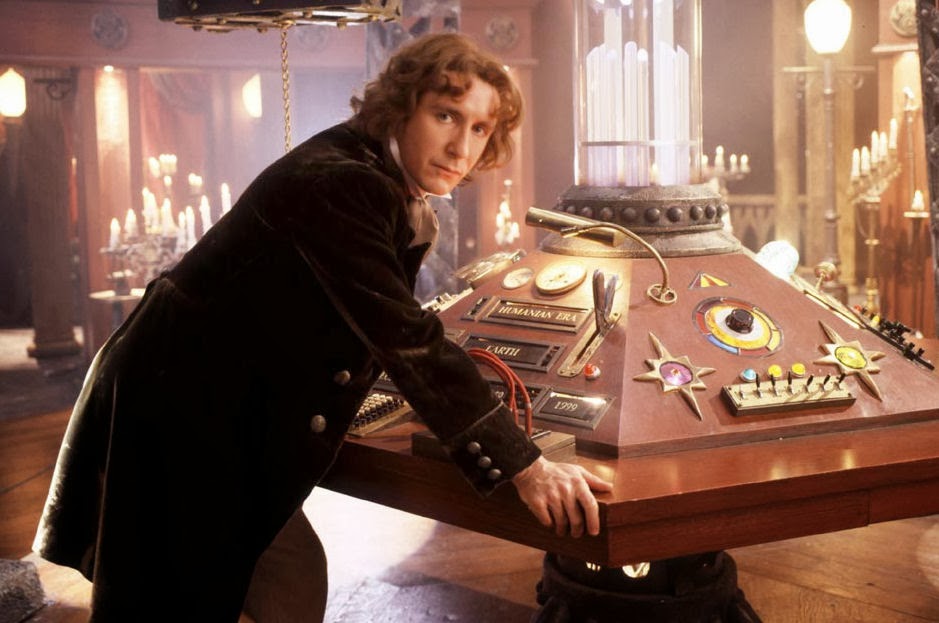 The Movie.
Also known as "The TV Movie", as it was a movie that was made for TV, but some people don't like that.
The only televised adventure for Paul McGann's Eighth Doctor.
Sole appearance of companion Dr.Grace Holloway and sort-of companion Chang Lee.
Eric Roberts brings the Master to life in a memorable performance.
Last appearance by Sylvester McCoy as the Seventh Doctor, travelling alone now.

The story? The Doctor is given a mission by the Time Lords to collect the mortal remains of his old enemy. The Master has been put on trial by the Daleks and exterminated, and its from Skaro that the Doctor has to pick up what's left.
Master escapes and takes over a human. Doctor gets gunned down by a triad gang in San Francisco, on the eve of the Millennium. Regenerates.
Stops Master stealing his body and future regenerations - as well as causing the TARDIS to suck the planet inside out. TARDIS brings dead companions back to life.
The Doctor is half-human - on his mother's side. This means that any human can open the Eye of Harmony, which is now housed in the TARDIS cloister room.

You can see just from that brief précis why a lot of people struggle to like this. The Americanisation isn't popular, and the apparent romance 'twixt companion and Doctor caused quite an outcry. Some would love to dismiss this in the same way as the Peter Cushing movies - but Sylvester's inclusion makes this all but impossible.
What has tended to happen is that certain controversial aspects have simply been ignored since 2005.
Things might have been worse. There might have been a complete re-boot - with the Doctor being grandson to Rassilon, who sends him off on a quest to find his lost father, Ulysses.
Posted by GerryD at 20:50