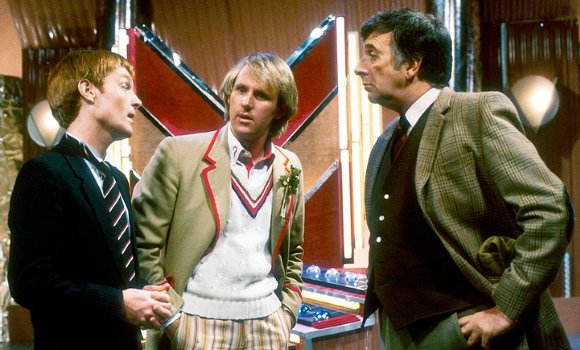 Mawdryn Undead.
The return of the Brigadier - except, of course, it wasn't supposed to be. He might know how many beans make five, but the idea of the Brigadier teaching just doesn't sit right.
The school setting was intended for the return of William Russell as Ian Chesterton. Season 20 being a big anniversary year, a link to the origins of the programme would have been far more appropriate and satisfying.
Russell was unavailable in the end, so Nicholas Courtney was called in.
Instead of a montage of clips featuring Zarbi, Mechonoids and Voord, we instead get to see some of the monsters encountered by the Brigadier as he regains his memory.
The story is famous for its contribution to the UNIT dating controversy. Up to this point, barring the odd calendar in shot or car registration, the UNIT stories could be placed a couple of years into the future. Had Ian been the returning character, this would have continued to be the case.
However, having the Brigadier already retired by 1977 threw a big spanner into the works. The controversy has only recently been finally put to bed with the Doctor placing the events of The Web of Fear in 1967 (in The Snowmen).
This story also marks the return of the Black Guardian (last seen in part six of The Armageddon Factor) - again played by Valentine Dyall. It forms the beginning of a trilogy involving the Guardian and new alien companion Turlough.
The story is also significant for containing one of most appallingly awful pieces of incidental music ever heard in the show. You know the bit I'm talking about - with the car at the beginning. Dreadful. Shame they couldn't have fixed that on the CGI enhanced version on the DVD...
Posted by GerryD at 19:36