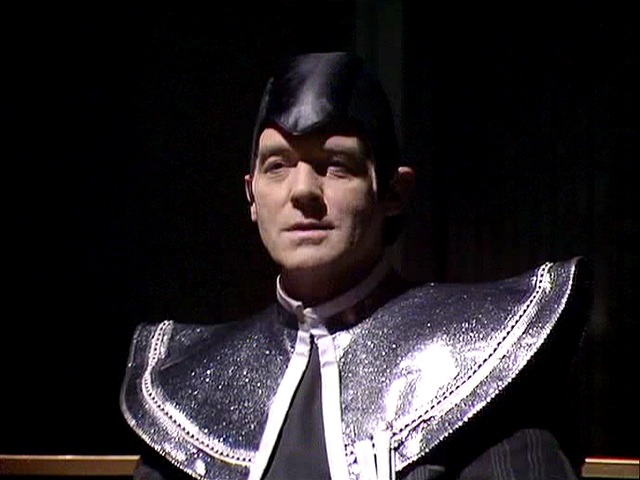 The Trial of a Time Lord.
Except it's not. Not really.
The longest ever Doctor Who story at 14 episodes.
Unless you count it as 4 separate stories with an overarching link, like the Key to Time season.
The Valeyard.
Gallifreyan politics.
The Doctor gains a companion he hasn't even met yet - namely Mel.
Farewell to Robert Holmes.
The troublesome - but productive - relationship between JNT and Eric Saward comes to an end.
The other Season 23 - what might have been had the hiatus not occurred.
Sacking of a Doctor.
Another companion death.
Except it isn't.
Gallifreyan justice is rather odd. We're used to being able to represent yourself in court, but the Doctor here discovers that you can also prosecute yourself. The Valeyard seems to make things up as he goes along. It starts as a tribunal and then turns into a trial halfway through.
Does the Valeyard not get an inkling that his scheme might be doomed when the Doctor presents evidence from his own future? The Matrix is only supposed to predict future events - based on the accumulated knowledge of dead Time Lords. It isn't supposed to show the future in detail.
Parts 1 - 4 (The Mysterious Planet) represent Robert Holmes' last completed story. It will be the final two episodes that will finally snap the already strained relationship between the producer and his script editor. Holmes wanted to end things on a cliffhanger - the Doctor and the Valeyard tumbling into a void, like Holmes and Moriarty at the Reichenbach Falls. JNT felt that it would give the BBC the excuse to end the series. It had only just scraped through a cancellation crisis (the so-called hiatus) and the programme was vulnerable. We lost the chance to see return appearances for the Ice Warriors and the Celestial Toymaker because of this. Planned stories were scrapped, and the episode count reduced to 14. The longest story - but the shortest season.
The introduction of Mel caused a great deal of fuss. Unfortunately most of this was blamed on the performer - which is unfair. The character was badly defined from the start.
Peri's horrifying demise is completely undermined by the preposterous tacked-on happy ending.
The series managed to stay alive - going on to enjoy an Indian Summer of sorts - but for the leading man it was a bitter ending.
"Carrot juice, carrot juice, carrot juice...".
Posted by GerryD at 21:15