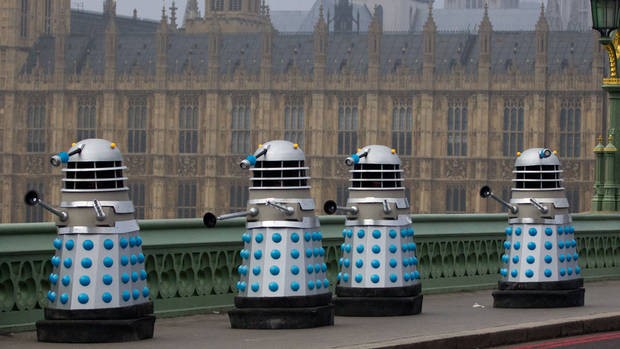 A couple of very important statements from the BBC this week. The first is that the 50th Anniversary story will receive a simultaneous broadcast globally - meaning, of course, that whilst we in the UK get to see it on a suitably cold and foggy Saturday evening (my weather predictions are a damn sight better than the Met Office's), others will see it early in the morning or late at night depending on your time zone.
The other announcement pertains to that troublesome Comic-Con trailer. The fact that the BBC had to release such a statement at all shows you the strength of feeling about this - and has lead to a more general concern about just how special this anniversary year is actually playing out.
The BBC are at pains to assure us that the trailer was only shown at Comic-Con, San Diego, and is not generally available in the US - as some people did think this was some kind of US vs UK thing.
The fact still  remains that the trailer's content can be freely commented upon / described - just not actually watched, which seems a bit daft to me. I appreciate events such as Comic-Con should get exclusives - but why can't an exclusive be time limited? As in you get to see it first and everyone else has to wait (but does get to see it eventually - i.e. a week or so later). Doctor Who seems to be the only "product" at Comic-Con where there seems to be a deliberate attempt to prevent presentations being broadcast. I thought it was about selling things to the widest possible market - not just a few hundred people in a room, a lot of whom are bloggers, journalists and so forth, and not necessarily producers and show-makers.
I could have sworn that when the Superman - Batman  crossover movie was announced, the image was released to the world. Henry Cavill et al did not say "Here's the image, but -  by the way - you're not allowed to show it to anyone".
For me, Steven Moffat does not come out of this very well. He seems all too quick to threaten. When the finale was leaked early on US Bu-ray a few months ago, it was "Don't leak or you won't get a special clip". This time round, "Leak, and I won't give Comic-Con another exclusive ever again".
Sheer petulance. Is the BBC really going to skip Comic-Con in future?
They've shown us some key Dalek images and we've read about the other scenes - Ten experiencing "sonic envy" and repeating Troughton's comments on seeing the Pertwee TARDIS etc - so why not just stick the blessed thing on the official site? It's not like we're asking them to stick the whole bloomin' synopsis on wiki.
Which brings me to the general concern about just how special this year has been so far.

I strongly suspect that, rather than Anno Domini 2013 being a special year for the programme, November 2013 will be a special month for Doctor Who - because a flurry of activity around then will be really what it all boils down to. And remember, Series 8 won't be on TV until autumn 2014 - and then probably only half a series yet again.