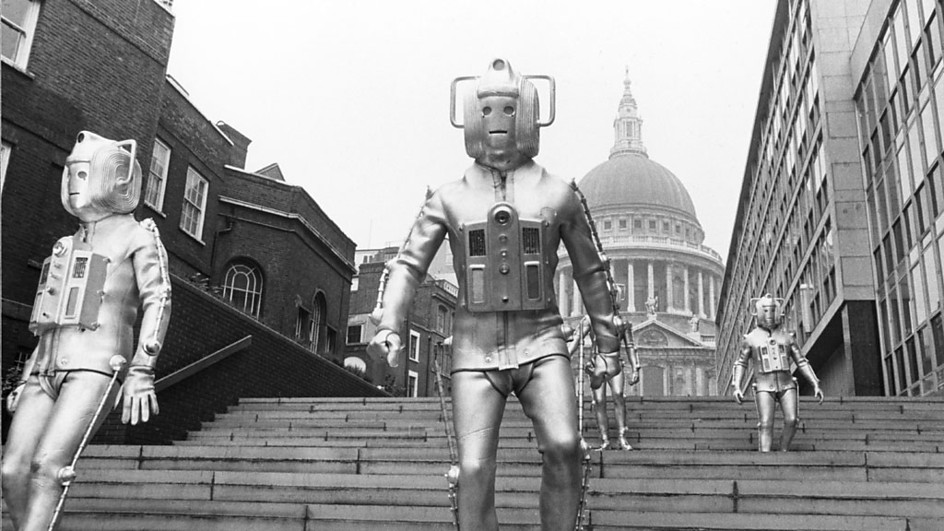 The Invasion.
The Web of Fear might have been the dry run, or the inspiration, but this is where the UNIT story really begins. The United Nations Intelligence Taskforce is unveiled for the very first time, and it is still very much part of the programme to the present day (albeit with a minor litigation-avoiding name tweak). We know from filming that it will feature in the 50th anniversary story.
Nicholas Courtney's character gets promoted to Brigadier - defining both character and actor for the rest of their lives.
Though he won't become a regular for a little while longer, the story also features John Levene's first appearance as Benton (still a corporal).
There are a couple of iconic Doctor Who moments on show - the Cybermen in the sewers (and popping out of them) and their march down the steps near St Paul's.
This is the only outing for this particular Cyber design - the first to feature the "ear muffs".
It is the Cyberships from this story which the new series' design references (as seen in The Pandorica Opens and A Good Man Goes To War).
Kevin Stoney's performance as Tobias Vaughn provides us with one of the greatest ever Doctor Who villains.
In some ways it is the longest running story of the series (The Daleks' Master Plan being little more than a series of smaller adventures strung together, as with The Trial of a Time Lord. This is one powerful single homogeneous story-line).
And just think, The Invasion was almost even more significant - had it featured Professor Travers making his third appearance, as originally intended.
Posted by GerryD at 19:36