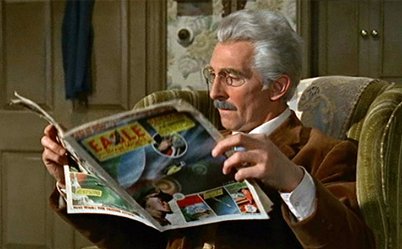 This blog already covered the two Peter Cushing Dalek movies last year - in the run up to the broadcast of Asylum of the Daleks and when my reviews had reached 1964's The Dalek Invasion of Earth and the Dalekmania phenomenon.
Sunday 26th May saw the centenary of Peter Cushing's birth, and the new issue of DWM has covered his involvement in the films with a piece by Marcus Hearn. The films themselves have had a remastered Blu-Ray re-release.
Before the week is out, I thought I would add some little tribute of my own to that great film and TV star, and have done a little bit of trawling through YouTube.
Here's a wonderful mock trailer for the third Cushing Dalek film that never was (but should have been). By the late 1960's Christopher Lee had distanced himself from the Dracula movies - but might he have cameo'd in a Dr.Who film starring his old friend?
Enjoy.