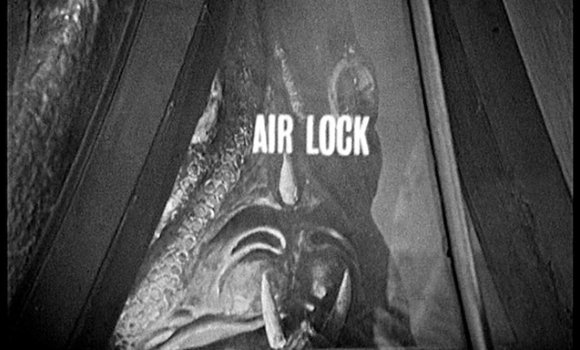 I've now had a chance to watch the Galaxy 4 episode "Airlock" a couple of times - as well as the thorough recreation of the missing episodes which surround it.
There was a lot more of parts 1,2 and 4 than I had expected - using the off-air soundtrack coupled with photos and CGI material. The lengthy clip from part 2 which we have had for a while is also included, naturally. It is not the full soundtrack (about 45 minutes worth) but it does give you all the plot you need.
As for the episode itself, it has been wonderfully restored. We finally get to see the enigmatic Rills - glimpsed only through a window. They appear more fully in the missing fourth part, recreated here using CGI.
When it was first announced that this and Part 2 of The Underwater Menace had been found, we had mixed feelings. We were glad that any missing episode had been found, but deep down regretted it hadn't been episodes from Power / Evil of the Daleks, The Web of Fear, or Fury From The Deep.
"Airlock" was considered merely a middling episode of a middling story.
Watching it now has made me re-evaluate this story - in a positive way. Whilst we have lots of episodes featuring Maureen O'Brien, there are very few with Peter Purves - so it's nice to see a bit more of Steven, even if his character is somewhat sidelined. It has been reported that he felt he had been given the Barbara role, as this story was commissioned at a time when the TARDIS line-up was changing.
Best thing about the episode without doubt is Maaga - played by Stephanie Bidmead. She has a wonderful one-sided talk with her Dusty Springfield-clone warriors - practically a soliloquy. She bemoans having her aspirations for conquest and glory stifled by being lumbered with these dim-witted soldiers.
We also get to see a are example of a flashback sequence in the classic series. Maaga has stated that one of her soldiers was murdered by the Rills, but the walrus-like aliens reveal that it was Maaga herself who cold-bloodedly executed her wounded subordinate - and we get to see this rather than just hear about it.
The title is one of those which refers to an element that only appears at the end of the episode - as with The Sensorites episode "Kidnap", for instance. Steven gets stuck in the titular airlock as he doesn't trust Maaga and doesn't know that the Chumblies are really benign.
If you already own the DVD of The Aztecs, and don't want to buy the Special Edition, I would urge you to reconsider - if not for the remastered adventure set in 15th Century Mexico then for the chance to enjoy this often overlooked Season 3 opener and view it in a new light. You'll be pleasantly surprised.
Posted by GerryD at 23:02