Story 66 - The Carnival of Monsters 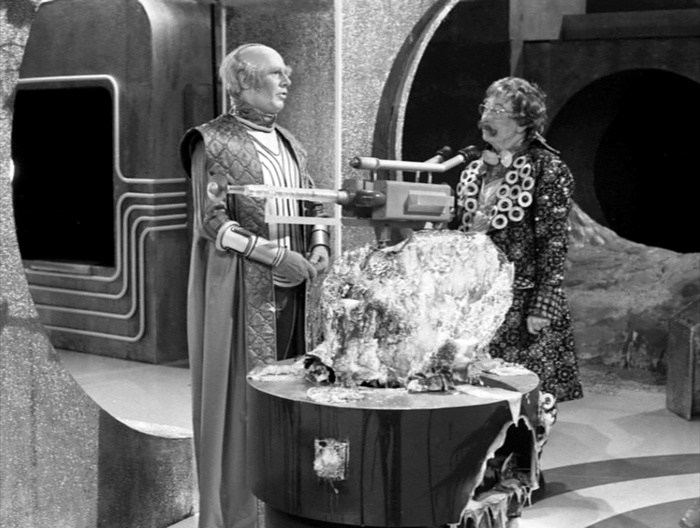 In which the Doctor decides to take Jo on a trip to Metebelis III, famous blue planet of the Acteon group. However, the TARDIS materialises instead in the dark, dank hold of a cargo ship. Exploring, they discover that they are still on Earth - in the middle of the Indian ocean in 1926. There are only two passengers - Major Daly and his daughter Clare. The Doctor and Jo are captured, assumed by Lt. Andrews of being stowaways. The Doctor notices a strange metal plaque on the floor, which the crew don't seem to see. He points out to Jo that things are not what they seem here. They are on the SS Bernice - which famously vanished at sea in this year. Also, if the clocks are right, it ought to be dark outside, instead of broad daylight. They escape and see further strange events. The ship is threatened by a prehistoric Plesiosaur, and then the crew and passengers repeat their actions - like a stuck record. 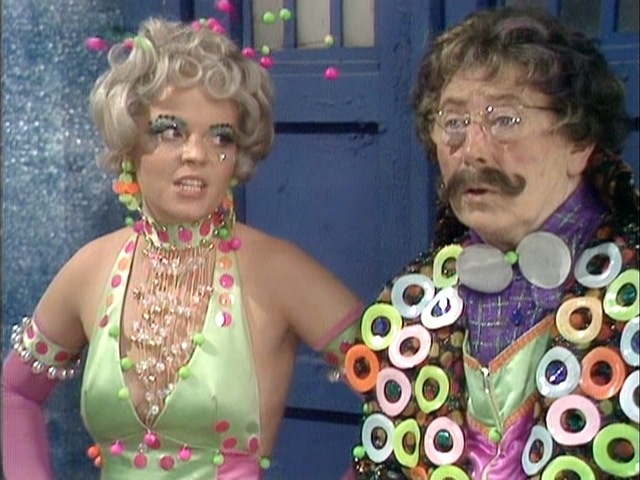 Meanwhile, the showman Vorg and his assistant Shirna have arrived on the planet Inter Minor. This world has just reopened its frontiers following years of isolation after a previous visitor introduced a terrible plague. A three man tribunal of grey faced Officials arrives to process their application to visit. Vorg has claimed they are here at the behest of Zarb, who is the President of this world. It is another Zarb, however, who he has met - a fellow showman. In charge of the tribunal is the overly bureaucratic Pletrac, and his deputies are Kalik and Orum. Kalik is Zarb's power-hungry brother. Vorg and Shirna have with them a Miniscope - an electronic device which can show audiences alien lifeforms. These are not recordings, but real creatures miniaturised and contained within. The truth dawns on the Doctor when he and Jo see a huge hand remove the TARDIS. They are trapped inside this intergalactic peep-show. Outside the miniaturisation field, it reverts to its real size on Inter Minor. The Doctor and Jo break out of the SS Bernice exhibit through the metal floor plaque and find themselves in the machine's workings. They enter another exhibit - a barren expanse of marshland. They are attacked by huge Drashig monsters. They escape back into the machine - but the omnivorous Drashigs follow them - much to Vorg's alarm. 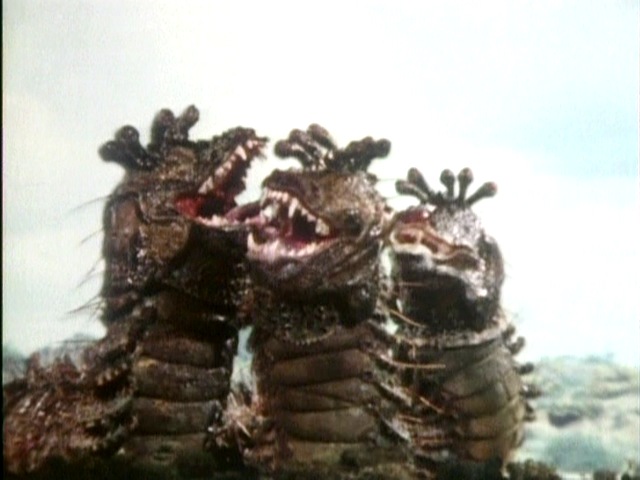 Kalik formulates a plan. He will allow the monsters to escape the Miniscope to threaten their city. This will discredit his brother and put an end to his plans to reopen their frontiers. He sabotages a laser cannon to prevent its use - hiding a vital component in Vorg's belongings. The Doctor escapes from the machine. He is furious that this Miniscope exists, as he had been instrumental into getting them banned. With the Drashigs on the loose within, the device is breaking down - threatening everyone held within. To free Jo, he re-enters the Miniscope to find her - giving Vorg instructions on how to remove them later. He has linked the machine to the TARDIS. The Drashigs break out and revert to normal size. Kalik is killed. Vorg finds the cannon component and destroys the creatures - then he frees all the exhibits. Pletrac welcomes Vorg as a hero. Without his machine, he turns to other means to make money. On the SS Bernice, the Dalys look forward to their seemingly interminable voyage coming to an end. 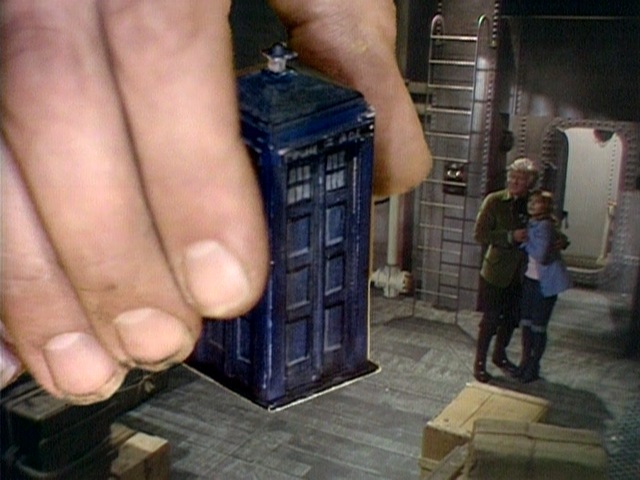 This four part story was written by Robert Holmes, and was broadcast between 27th January and 17th February, 1973. Producer Barry Letts had the option of directing one story per season, and this was the one he chose for Season 10.
This story marks the Doctor's first journey after the ending of his exile to Earth. It has the first mention of Metebelis III - which will play a part in his eventual "death". It also marks the first proper Holmesian double-acts in Kalik and Orum, and also in Vorg and Shirna. Both couples have some wonderfully humorous lines.
We learn a little bit of the Doctor's life before he left Gallifrey, as he campaigned for the High Council of the Time Lords to ban Miniscopes.
On Inter Minor, he does nothing, however, to alleviate the virtual slavery of the Functionaries who we see working at the space port.
The Functionary masks are a bit too obviously just that, and there are a few make-up malfunctions with the Officials' bald headpieces. 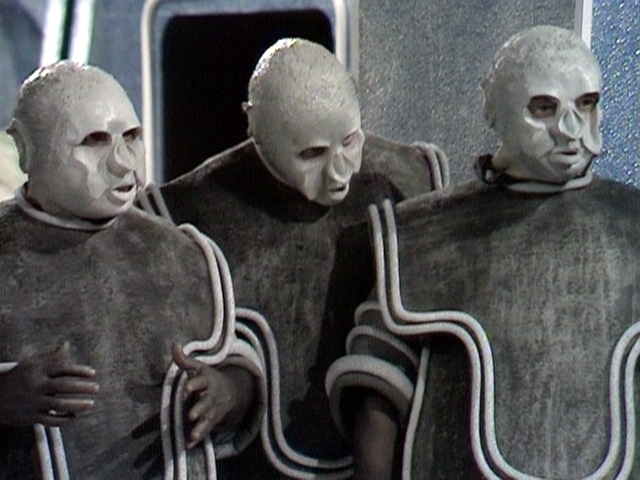 There is an impressive guest cast. Major Daly is played by Pertwee's old friend from The Navy Lark, Tenniel Evans. Evans had originally encouraged Pertwee to put his name forward for the role of the Doctor on the announcement of Troughton's departure. Clare is played by Jenny McCracken. Andrews is Ian Marter, who had been the original choice to play Mike Yates, and who would return soon as companion Harry Sullivan.
Vorg is played by veteran character actor Leslie Dwyer - who would go on to play the child-hating children's entertainer Mr Partridge in the BBC sitcom Hi-Di-Hi!. Shirna is Cheryl Hall, who also found sitcom fame in Citizen Smith and who went on to enter real local politics as a Labour Councillor.
The Official triumvirate are Peter Halliday as Pletrac, Michael Wisher as Kalik (both of whom I have posted on separately in the past) and Terrence Lodge as Orum. He had played Medok in The Macra Terror and would return for Pertwee's final story.
The SS Bernice exteriors were filmed on a real vessel on the Thames. The ship was due to be broken up, and Pertwee famously took an expensive component home with him (a brass binnacle) - one that was due to be auctioned off. Letts had to diplomatically intervene to ensure its return.
Episode endings for this story are: 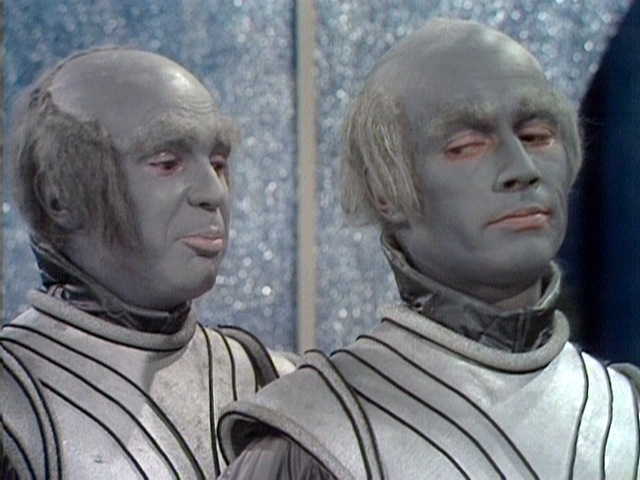 Overall, not a bad little story. There's a great deal of humour and some wonderful performances. The changing locales help to keep it fresh and it holds up well over the four episodes.
Things you might like to know:

Posted by GerryD at 23:25
Email ThisBlogThis!Share to TwitterShare to FacebookShare to Pinterest
Labels: Classic Series