Inspirations - The Invasion of Time 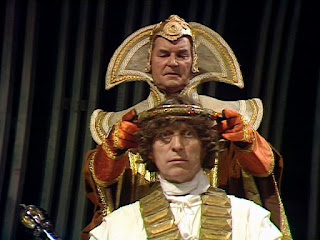 The Invasion of Time was the first of two Doctor Who stories to be written by David Agnew. Quite a feat for someone who doesn't exist. Movie buffs will be aware of the name Alan Smithee, attached as the director credit for a number of films. It was a name used when the real director decided to take their name off the movie for various reasons (mainly thanks to tampering of their work by studio executives). 1997 saw the release of a movie called An Alan Smithee Film, which was so bad that its director actually opted for the Smithee credit himself. The BBC used the name David Agnew as a pseudonym for when a writer wanted to take their name off a production, or - as in this case - some breach of the Writers Guild guidelines was being made. The Guild was basically a writers' trade union, and fought to uphold the rights of its members. It frowned upon producers and script editors commissioning stories by themselves, as this denied its members work.
Doctor Who's script editor Anthony Read had managed to secure the writing services of an old colleague of his - David Weir. He would be given the six part season finale to author. Graham Williams loved the Time Lords and wanted to explore their society further, so a return trip to Gallifrey was asked for. Weir had worked with Read a number of times, especially on a series called The Lotus Eaters, set in Greece.
Weir's story revealed that the Time Lords didn't actually come from Gallifrey - they just lived there. The planet was really the home of a race of cat people, who allowed the Time Lords to set up their citadel there. By way of paying the rent, as it were, the Time Lords gave the cat people some technology so that they could bring aliens to the planet to fight in gladiatorial games. The story has been referred to as "Killers of the Dark" or "Killer Cats of Geng Singh".
Read and Williams quickly saw that Weir's story was totally unworkable. There would have been a huge amount of expensive night filming required, plus scenes set in a stadium the size of Wembley filled with hundreds of extras in cat costume. Read was quite upset that his old friend had let him down so badly. The decision was made to scrap the story, but there was little time for another writer to come up with a new six part story. 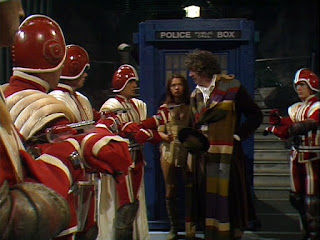 Robert Holmes was approached, but he had no wish to return to the series so soon after leaving it, and was busy on a Blake's 7 script anyway. He did at least offer some advice around the structuring of the longer six part stories - splitting them into four and two part sections to give the story some fresh impetus when it might begin to flag. The Seeds of Doom, for instance, had an almost self-contained two episodes set in Antarctica, before relocating for the remainder of the story to an English country house.
With time running out, Williams and Read decided to write the story themselves, with the script writer doing the bulk of the work and the producer throwing various ideas into the mix. This is why they selected the name of David Agnew to be the on-screen writer's credit.
Both men rewatched Holmes' The Deadly Assassin and decided to make a sequel of sorts. Inflation was still running high and to keep costs to a minimum it was realised that they could reuse sets and costumes from that story. The Deadly Assassin had seen the Doctor put himself forward as a candidate for the Presidency of the High Council of Time Lords, as a means to buy time and get himself off a capital treason charge by finding out who really assassinated the outgoing President. This turned out to be the only other contender - Chancellor Goth - who was later killed. The story therefore ended with the President role vacant. Read and Williams picked up on this and had the Doctor return to Gallifrey and take up the position, after first making a secretive rendezvous with an alien spaceship.
The audience would be led to believe that the Doctor had gone rogue and had allied with these aliens - the Vardans - to allow them to invade his homeworld. Even Leela would be made to suspect his motives.
To make things interesting, following Holmes' advice, it would be revealed after four episodes that the Vardans were really just the front for another set of alien invaders who would turn up for the last two episodes. 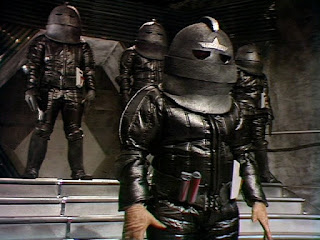 Williams and Read both liked the Sontarans, and Holmes gave his blessing for them to be used. Thinking about cost again, there were existing costumes to be used.
Another huge problem was looming for what was already a troubled production. Last time, we mentioned how Williams was asked to contemplate scrapping Underworld and adding its budget to the season finale. It soon became apparent during the making of the fifth story that industrial action would hit the series whilst The Invasion of Time would be in production. Williams was also asked by his boss Graeme McDonald to consider scrapping the finale instead and using the money to finish Underworld with decent sets. As we have said before, Williams was insistent that his first season as producer would be completed as originally planned, with a full run of six stories covering 26 episodes. Anything less he would take as a personal failure.
The decision was therefore taken that Invasion would have only a single three day studio recording block - quite unheard of for a two and a half hour story. Everything else would be filmed on location, and this would include the extensive TARDIS interior scenes planned for the last two episodes. A hospital was found in Surrey which had a mental health wing which had been decommissioned. Some of its rooms and corridors would appear as parts of the TARDIS, whilst some of the studio sets which they were unable to film on at Television Centre would be shipped down and set up on location.
The studio recording concentrated on Gallifreyan scenes, especially the large Panopticon set, which had been built for The Deadly Assassin and which would be too large to relocate. The second large chamber where the TARDIS materialises is just the Panopticon set redressed. Kelner's office was also in studio, but when you see the same set redressed as Rodan's workplace, it is being filmed at the hospital site. 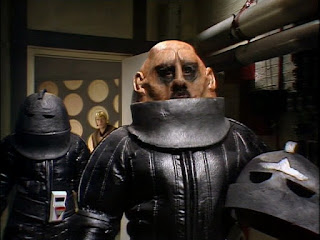 Sontaran Commander Stor's make-up changes drastically throughout the last two episodes. At times, when he is wearing his helmet, it is apparent that actor Derek Deadman isn't wearing any mask at all underneath. In other scenes he has distinct black make-up around the eyes and mouth, which vanishes in other sequences as the make-up was refined on location.
This unusual production schedule led to another problem. Usually, scenes which were to be shown as inserts on video screens would naturally be filmed first, and dropped in by the production gallery as needed. On this occasion this wasn't always possible - which is why the Vardans always seem to be seeing weird geometric designs on the view screen even when they are commenting upon what the Doctor is up to. The footage simply wasn't available to be inserted.
The Deadly Assassin had featured a number of relics from the time of Rassilon. To these we add here the Coronet and the Great Key. 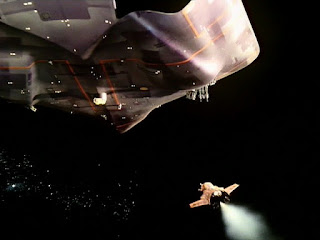 One notable inspiration we cannot fail to mention is the opening sequence of the story where a huge spaceship appears at the top of the screen and we see the underside glide over us. This was a wholesale steal (or homage as they would have insisted on putting it) from the opening moments of Star Wars, which most of the audience would have seen by this point, it having hit UK cinemas in December 1977. (This story started broadcast on February 4th of the following year).
Just to add to Graham Williams' headaches during the making of this story, Louise Jameson had already informed him that she was intending to leave at the end of the season. She had told him of her plans right back when The Sun Makers was in production. Williams hoped to make her change her mind up to the very last minute, but she had already accepted theatre work - which is why Leela's departure is so unsatisfying. She basically announces that she is staying on boring old Gallifrey to marry a man she has barely said two sentences to. (Had she said she was going to marry Nesbin and hunt with him in the wastelands of Outer Gallifrey we might just have accepted it). Williams had been so convinced that he would get Jameson to change her mind that her departure was never properly set up.
K9 also decides to leave, intent on staying with Leela. However, in the closing seconds it is revealed that the Doctor already has K9 Mark II waiting in the wings. This was because the VFX team had created a new prop which worked a lot better than the one introduced during The Invisible Enemy.
Next time: Graham Williams finally gets to make the series he originally wanted to do, with an overarching story arc. The Doctor is a man on a mission, and he gets an ice maiden for a new assistant - which is appropriate for the wintry setting of Ribos...
Posted by GerryD at 23:17