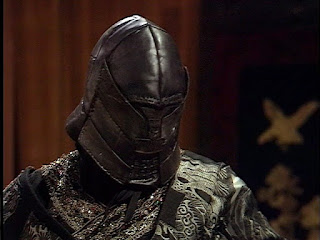 A notorious war criminal from the 51st Century, Greel was Minister for Justice at the time of the Fifth World War, when he earned the nickname of the Butcher of Brisbane. He was a scientist who conducted experiments on life-force extraction on prisoners, killing thousands, but his main focus was on the Zigma Experiment - an attempt to devise a form of time travel. As his allies faced defeat he used a Time Cabinet to flee into the past, taking a murderous cyborg creature known as the Peking Humunculus with him. The Experiment was only a partial success, however, and he arrived in 19th Century China horribly disfigured. he was found by a peasant named Li H'sen Chang, who hid him from Imperial forces. They captured the Cabinet and gave it to the Emperor, who in turn gifted it to the mother of future London pathologist Professor Litefoot. Chang believed Greel to be the god Weng-Chiang. The scientist helped him develop powers of hypnotism, then the pair set off to locate the Cabinet. Chang became a renowned stage magician, which allowed him to travel around Europe in search of the machine. The Peking Humunculus was disguised as his ventriloquist dummy - Mr Sin. The Time Cabinet was finally traced to London, where Litefoot now lived. He thought it merely a decorative piece, as no-one had ever been able to open it - Greel possessing the only key.
Greel established a base in the cellars beneath the Palace Theatre. 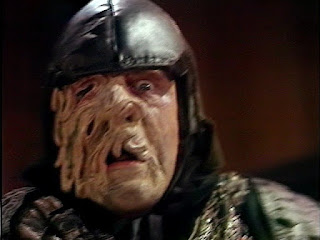 The effects of the Zigma beam on his genetic make-up meant that he was forced to extract the life force from a number of people in order to survive, so Chang was frequently sent out to abduct young women for him. Greel believed that if he were to use the Cabinet again his body would be repaired. However, the Doctor knew that the machine was unstable and could destroy London if operated again. As the Doctor, Litefoot, and theatre owner Henry Gordon Jago closed in on him, Greel abandoned Chang due to his failures to kill the Doctor. He was able to retrieve the Cabinet from Litefoot's home and move it to his new base in the Limehouse district of the city. He discovered that Mr Sin's murderous instincts were becoming too strong for even him to control, as the creature was prepared to kill him as well as the Doctor and his friends. Greel perished when he fell into his own life essence extraction machine, and the Doctor smashed the Cabinet's key to prevent it from ever being used again.

Played by: Michael Spice. Appearances: The Talons of Weng-Chiang (1977).