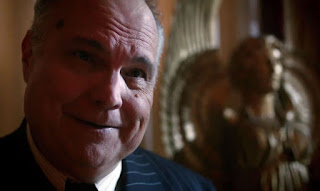 Julius Grayle was a New York crime boss who used his ill-gotten wealth to collect works of art. He was particularly interested in statuary, and had managed to obtain a Weeping Angel, as well as a number of cherub-like versions of the creatures. He kept the latter in his cellar, and used them to dispose of his enemies. Grayle lived in fear of the other Angels which infested the city in 1938. He employed a Private Detective named Sam Garner to find out more about the Angels - sending him to a building called Winter Quay. Garner never returned, as the building was being used by the Angels to trap people and feed off their temporal potential. Grayle then had Professor River Song and Rory Williams abducted, as he had heard that she knew something about the creatures. Rory was given over to the cherubs, which sent him to Winter Quay, whilst River was seized by the captive Angel. It had been tortured by Grayle and was too weak to send her back in time. She was forced to break her own wrist in order to get free. The Doctor and Amy had traveled back in time to ancient China and placed a message for River on one of Grayle's antique vases. The mobster was knocked out by the arrival of the TARDIS. When he awoke, it was to find River gone and his Angel free - and the front doors were wide open to allow the other Angels to come inside and take their revenge on him.

Played by: Mike McShane. Appearances: The Angels Take Manhattan (2012).
Posted by GerryD at 23:02