G is for... Grayling 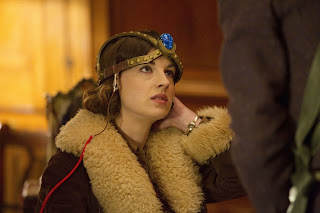 Emma Grayling was a noted empathic psychic who, in 1974, was assisting Professor Alec Palmer at Caliburn House. He had bought the property in order to investigate the ghost which was said to haunt the building. Palmer wished Emma to make contact with the apparition and learn who she was and why she haunted the house. The pair's investigations were interrupted by the arrival of the Doctor and Clara. The Doctor had come here to see if Emma could tell him something about Clara, whose existence he was suspicious of - having encountered her, or someone like her, in a number of different time zones. She was unable to tell him anything about her. The Doctor used the TARDIS to take photographs of the house throughout history, and the ghost's image appeared in them all - even in prehistory and in the far future. The Doctor realised that the apparition was a time-traveller, trapped in some pocket dimension and breaking through into this one at the house. Emma was fitted with a crystal from Metebelis III so that she could create a bridge to the trapped person, in order that the Doctor could cross over and rescue her. He succeeded, and brought back a young woman named Hila Tacorien. She was a test pilot for a time machine from Earth's future. The Doctor suspected that there was some link between Palmer, Emma and Hila which had brought them together, and deduced that Hila was a descendant of Palmer and Grayling. They were in love with each other, but neither had felt confident to say how they really felt about each other.