Inspirations - Image of the Fendahl 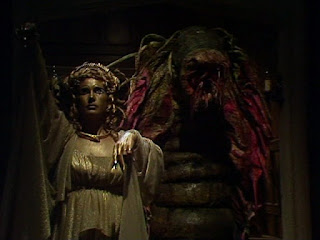 Chris Boucher had written two very popular stories for Season 14 - The Face of Evil and Robots of Death -  and so Robert Holmes had invited him to submit another script for Season 15. The Gothic Horror feel of the Hinchcliffe-Holmes production team inspired him to try his hand at a ghost story, although changes in that team were already afoot. Hinchcliffe had already moved on to produce the crime drama Target, and Robert Holmes was about to leave as well and return to freelance writing. He had stayed on Doctor Who for four years - twice as long as he had intended to stay. Holmes was asked to take over as Script Editor on Blake's 7, but he declined as it would be too similar to the job he was leaving. As it was, it would be Boucher who would be offered the Blake's 7 gig - so Image of the Fendahl would prove to be his final contribution to televised Doctor Who.
Boucher's initial inspiration for this story came from a Sci-Fi story he had read in which an alien intelligence influenced the development of the human race in order that it might continue to exist through them.
The background to the Fendahl is that it evolved on the fifth planet of our solar system. It was a creature which fed on death, and so consumed the rest of its kind until only one remained. Fearing that it would ultimately destroy every living thing in the universe, the Time Lords intervened and attempted to kill it by blowing up the planet and trapping the remains within a time loop - hiding it from the rest of the cosmos. However, the Fendahl managed to transport itself through space to the third planet - Earth - where it was destroyed in a volcanic eruption millions of years ago. Its power merely remained dormant, however, in a neural relay in its skull, and this is what was able to influence mankind's development to the point where the creature could be reborn.
The neural relay is shaped like a pentagram - which is why this symbol has taken on occult significance. It comes from a race memory implanted by the Fendahl. 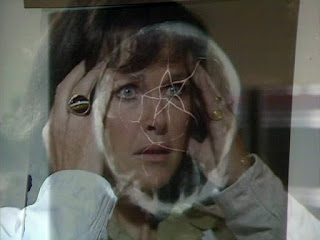 All this talk of ancient aliens influencing the human race, and of race memories resurfacing, naturally reminds us of our old friend Professor Quatermass. The influence of the three Quatermass serials has been mentioned quite a few times in these "Inspirations posts", since we looked at Spearhead From Space. Events in this story are triggered by the finding of an ancient human skull - and this is also the starting point for Quatermass and the Pit, which was broadcast by the BBC in December 1958 - January 1959, before getting the Hammer treatment in 1967. Workmen digging a tube line extension in Knightsbridge unearth some skulls which paleontologist Matthew Roney believes belong to one of our earliest ancestors. Things are complicated when what appears to be a German bomb turns up next to the skulls. However, this proves to be a spaceship which must have crashed millions of years ago. Inside are three-legged insect creatures. The authorities think it some sort of Nazi propaganda hoax, but Quatermass and Roney realise the true implications. The insects are all that remain of the Martian race, and they were coming to Earth in prehistoric times to genetically modify our primitive forebears as the only means to preserve their own dying civilisation. Once the activity around the dig reactivates the ship, which has some form of psychic power, the Martian influence is triggered in those people who are descended from the modified ancestors. They are compelled to reenact the ancient racial culls, which kept the Martian gene pool pure. Nigel Kneale makes clear the link between the Martian influence and racial pogroms over the centuries. (There had been race riots in West London as this was written). 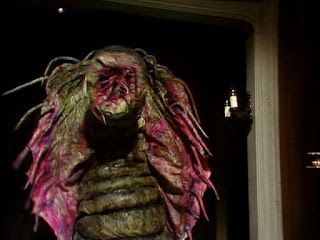 As well as his use of the pentagram in the story, Boucher used other superstitions. The Fendahleen can be destroyed by salt, and old Martha Tyler has previously given her grandson a talisman containing salt as a defence against evil forces. The Fendahleen are slug-like in appearance, and salt is used to kill slugs and snails as it basically desiccates them. We also have the old tradition of throwing a pinch of salt over your left shoulder should you spill some - as the Devil looks over that shoulder and salt is anathema to him as well.
The unlucky number 13 also features, as the Fendahl is a gestalt creature - many parts making up the whole. There is a human core and 12 of the Fendahleen which form its feeding parts - so it has 13 components, and is weakened when incomplete.
The country house where Dr Fendleman carries out his researches is called Fetch priory, and the nearby village is called Fetchborough. A Fetch is a particular kind of supernatural entity which is a doppelganger. Some people are said to have come to face with one of these and it presaged their demise. Other stories tell of people seeing the apparition of a friend or relative who is known to be many miles away - only to later learn that that person died just at the time when they saw the doppelganger.
Mrs Tyler mentions it being Lammas Eve, which dates this story to 30th / 31st July. Lammas falls on August 1st and marks a harvest festival, when people used to donate a loaf of bread to the church made from the first crop. Lammas is a corruption of Loaf-Mass.
The Doctor mentions that most haunted places are usually associated with time rifts, and gives this as a reason for Mrs Tyler's supernatural gifts. This foreshadows the Cardiff Rift, where the maid Gwyneth also has supernatural powers thanks to growing up close to it. One popular theory for ghost sightings is that they are actually time slippages, and we are seeing a glimpse of someone going about their day to day business from the past. This explains them passing through walls - there used to be a door there - and their being seen to float (the floor surface has changed). Note that the famous case of the Roman soldiers which passed through a cellar in York were only seen from the knees upwards. When the floor was dug up, the Roman road surface was found a foot or so beneath.
Boucher wrote a number of night time scenes in his script, and these are usually amended by the Script Editor as night shoots were so expensive. However, Holmes decided to retain these as he felt they would add to the atmospheric look of the show. I am reminded of a relatively low budget British Sci-Fi film when I watch the sequences when first a hiker and then the Doctor are menaced by some unseen creature in the woods. Fiend Without A Face (1958) is a highly effective little horror movie in which people living near a USAF base in Canada are stalked by some invisible force which kills by sucking out their brains and spinal columns. They have been created accidentally by a local scientist who has been experimenting with mind control. The victims of the Fendahleen are said to have a tiny blister-like wound, and have their life force sucked out, and the creatures are only heard when they hunt through the woods - just like the brain creatures in Fiend. 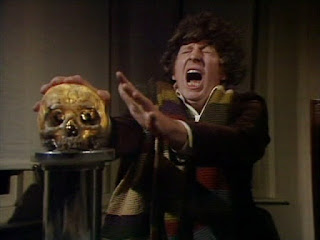 The skull of the Fendahl is said to have been found in central Africa. The uninitiated might think that the dog which finds the dead hiker is named Leakey because it was never properly house-trained, but the reference is actually to the Leakey family (Louis, Mary and son Richard), the Kenyan paleontologists who discovered what was, at the time, the earliest fossilised remains of Homo Sapiens. Adam Colby, who found the Fendahl skull, is at one point congratulated on his excellent potassium-argon test, which helped to date it. Also known as a K-Ar test, this dates rock samples by comparing the ratio of decay of isotopes of potassium 40 and argon 40. It is most effective with the dating of very ancient rocks - over 100,000 years old - as newer rocks won't contain enough argon.
The story originally had scientist Max Stael, who is leader of a local coven which wants to resurrect the Fendahl, putting a gun in his mouth just before he is heard to shoot himself. As new producer Graham Williams had been tasked with removing the horror from the programme, and so avoiding any more complaints from Mrs Whitehouse, this scene had to be toned down.
This was Robert Holmes' final story as Script Editor. Shadowing him was his replacement - the late Anthony Read. he had been invited back to the BBC as a producer, but declined as he had already produced for a number of years. When Williams' boss - Graeme McDonald - offered him the Script Editor role on Doctor Who he is said to have jumped at the opportunity. One of his first acts with this story was to rewrite the opening and closing TARDIS scenes to include K9. It hadn't been part of Boucher's story as it was only decided to retain it late in the day - which is why for its first adventure in the TARDIS it is under repair and so unable to play any part in the proceedings.
The reason why Leela wears her hair up in a bun was because she had a haircut just before production - and too much was cut off.
Wanda Ventham, who plays Thea Ransome / the Fendahl, had previously appeared in the show during Patrick Troughton's time - as Jean Rock in The Faceless Ones. Image of the Fendahl was her first acting job after giving birth to her son - Benedict Cumberpatch.
It should be noted that the production order for Season 15 was The Invisible Enemy, then Horror of Fang Rock, then The Sunmakers and then Image of the Fendahl. Fang Rock was made second because of Terrence Dicks' vampire story having to be totally rewritten, and Fendahl was moved to third broadcast slot to split two futuristic stories.
Next time: Everyone runs from the taxman. All those stories Robert Holmes wrote when he was also being paid to be Script Editor come back to haunt him, as a hefty tax bill lands on his doormat...
Posted by GerryD at 23:31