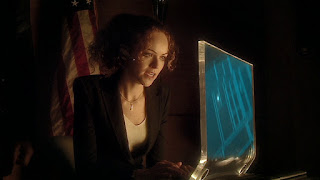 Diana Goddard was one of the personal assistants to billionaire Henry Van Statten, based at his private bunker built deep beneath the Utah desert. The complex contained a museum of extra-terrestrial artefacts, including one live exhibit - a Dalek. Goddard had seen how other PA's could be instantly dismissed, their memories wiped as they were dumped on the road at the whim of her employer. As such, she was determined to keep on his good side and work efficiently. The museum was visited by the Doctor and Rose Tyler, after the TARDIS had picked up a distress signal coming from the Dalek. The creature managed to escape and it killed most of the people in the bunker. The Doctor warned that if it got outside it would wipe anyone it encountered. However, the Dalek had become infected with human traits after the contact with Rose which had regenerated it. It elected to blow itself up rather than lose its purity. After the crisis, Goddard - disgusted that his actions had led to the deaths of so many people - had Van Statten deposed. He would have his memory wiped and be left dumped on a roadside somewhere.