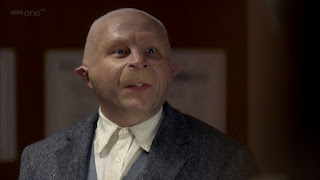 A member of the mole-like Tivolian race who had been transported to the prison vessel in which dwelt an alien Minotaur. This prison looked like a 1970's English hotel, and each of its inhabitants had something which they feared hidden in one of the many rooms. The Minotaur had been trapped on the vessel after the people who once worshiped it turned against it. The captives fed its need for faith - their fears causing them to turn to what they most believed in.
Like all his people, Gibbis was naturally cowardly. His race were known as the most invaded in the universe, as they always meekly accepted subjugation. The capital city had wide boulevards for invading armies to march down, and their national anthem is "Glory to <insert name here>". Gibbis' fear was personified by the Weeping Angels, as they could not be reasoned with in any way. He was prepared to sacrifice his fellow captives in order to save himself. As it was, his strategy worked, as he was the only one of the group of captives encountered by the Doctor, Amy and Rory to survive.