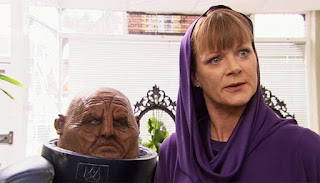 In which Rani's mother, Gita, is working late in the evening at her florist shop when she is visited by a new customer. This is Mrs Wormwood - the disguised alien Bane who had attempted to take over the planet using the soft drink Bubble Shock, and who was responsible for the creation of Luke Smith. Luke has recently been having nightmares about her. Rani alerts her friends when Gita fails to come home, so they go to the shop. Sarah finds a hidden message on the cheque which Mrs Wormwood wrote for Gita, and this leads them to an industrial estate. Here they find Rani's mother, as well as Mrs Wormwood. She asks them for help. Ever since the failed invasion, she has been on the run from her own people who will kill her if they capture her. To prove the point, a number of Bane arrive and attack. Mrs Wormwood saves Sarah, and she is taken to Bannerman Road. Here she is placed in a containment field by Mr Smith, as Sarah does not fully trust her. She claims to have come to warn Sarah of an alien threat. Centuries ago a destructive creature named Horath was defeated. It could not be killed, so its body and consciousness were separated. She claims that the Bane have found the consciousness, and are now looking to reunite it with the body, which was buried somewhere on Earth. 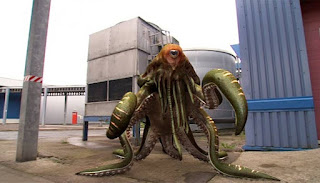 The location is to be found described in the Tunguska Scroll, which is now in the custody of UNIT at its high security Black Archive. Sarah decides to call on her old friend retired-Brigadier Sir Alistair Gordon Lethbridge-Stewart for help in accessing the Archive - leaving Luke and Clyde with the captive Mrs Wormwood. The Brigadier helps Sarah and Rani break into the complex, and they steal the Scroll. They are pursued by Major Kilburne, who commands the Archive. Back at the attic, Mrs Wormwood manages to convince Luke to let her go, playing on the fact that she gave life to him and promising to make him powerful by her side. The Bane attack, but they are saved by the arrival of the Sontaran Commander Kaagh, who they had encountered a few weeks ago. He is now working for Mrs Wormwood. 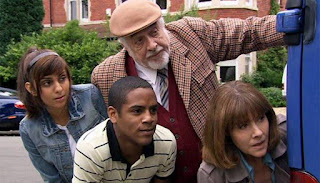 Everyone flees to Gita's shop to hide out. Kaagh appears and takes Luke hostage, and Mrs Wormwood seizes the Scroll. Luke is taken to the industrial estate where Kaagh has his spaceship hidden. The Consciousness of Horath is downloaded into the Scroll. Luke tries to run off, and Kaagh gives chase, but Mrs Wormwood stops him from shooting the boy. She really does want him to leave Earth with her, and sees herself as his true mother. Back at Sarah's attic, Mr Smith is asked to help find where Mrs Wormwood might have taken Luke. Major Kilburne arrives, but proves to be a disguised Bane. The Brigadier shoots him with a gun hidden in his walking stick, allowing Sarah, Rani and Clyde to escape. Mr Smith had guided them towards an ancient stone circle which Clyde recalls visiting on a school trip. They hurry there and find Mrs Wormwood, Kaagh and Luke about to open a portal to another dimension where Horath is to be found. The circle has a forcefield around it which only humans can cross  - which is why they needed Luke to insert the Scroll into the central stone. Kaagh feels humiliated by Mrs Wormwood, and decides to turn against her. Before she can kill Sarah, after being rejected by Luke, Kaagh grabs hold of her and they fall into the portal. Sarah destroys the Scroll, leaving Mrs Wormwood and Kaagh trapped in the other dimension. Everyone returns to Bannerman Road where Sarah says goodbye to the Brigadier. 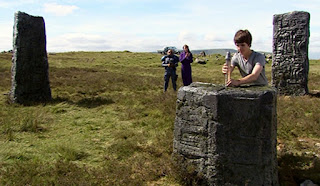 Enemy of the Bane was written by Phil Ford, and was first broadcast on 1st and 8th December, 2008. It marks the end of the second series of The Sarah Jane Adventures. It is notable for the appearance of Nicholas Courtney as the now retired Brigadier Lethbridge-Stewart - his final on-screen appearance in this iconic role, having first appeared as the character 40 years previously.
The story acts as a sequel both to the pilot episode - Invasion of the Bane - and to the Series 2 opener, The Last Sontaran. In the latter story, Kaagh had been despatched back to Sontar in disgrace. Here we learn that he could not return home due to the humiliation of his defeat by children, and so had become a sort of mercenary - which is how he came to be working with Mrs Wormwood.
She had last been seen about to flee the exploding Bubble Shock factory.
She is once again portrayed by Samantha Bond, and Kaagh is again played by Anthony O'Donnell. 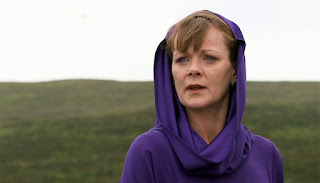 UNIT Major Kilburne is played by Simon Chadwick. He turns out to be a Bane in human disguise, but the real Major is in charge of the Black Archive. Here it appears to be a large complex in the middle of the English countryside. When we next see it, it is located under the Tower of London and is part of UNIT HQ. Presumably it was relocated thanks to the ease with which Sarah and Rani managed to break in - albeit with the Brigadier's assistance.
Overall, a very satisfying end to a stronger second season. Great to see the Brigadier get one final outing, though a pity he didn't get to reappear in the parent programme.
Things you might like to know: