G is for... Gilmore, Group Captain 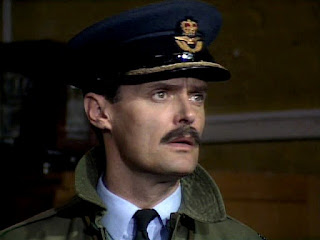 Group Captain "Chunky" Gilmore led the Intrusion Countermeasures Group - a British scientific-military organisation which was a precursor to UNIT. Gilmore had as his chief scientific adviser Prof Rachel Jensen. In late 1963, the Group were called in to investigate strange radio signals coming from the Shoreditch area of East London - emanating from Coal Hill School, and a nearby junkyard in Totter's Lane. The Doctor arrived in the area soon after, accompanied by Ace, and he inveigled himself onto the investigation. At the junkyard, he identified the alien life-form which the Group had cornered in a shed as a Dalek. Gilmore was forced to accept the Doctor's help when it became clear that he had knowledge of the Daleks. He clearly reminded the Doctor of his old friend the Brigadier, as he called Gilmore "Brigadier" at one point. As the Doctor struggled to stop two rival factions of Daleks from destroying the planet in their hunt for the Hand of Omega, which he himself had hidden in the district many years ago, Gilmore discovered that he had a traitor in his midst. His seemingly loyal sergeant, Mike Smith, was secretly working for a fascist group who wanted to ally with one of the Dalek factions. Gilmore was forced to relieve him of duty, but later attended the young man's funeral after he had been killed by a Dalek agent.

Played by: Simon Williams. Appearances: Remembrance of the Daleks (1988).