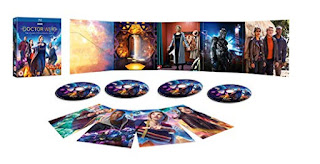 The Series 11 box-set in either DVD, Blu-Ray or Steelbook formats is already out in the UK. It has failed to dent the charts - coming straight in at No.80 in the official chart, before dropping down to No.90 this week. The set is due for release in the US in the next couple of days, and Amazon US has it listed at a discount price ($20 less than the list price).
I have to admit that I haven't bought it myself yet. I will wait and pick it up cheap later on - mainly because I am in no great rush to rewatch the series, and because I am currently rewatching the entirety of Doctor Who from the beginning and have so far only got to the mid-Troughton period - so I won't be reaching Series 11 for quite some time.
February 18th sees the New Year's Day Special, Resolution, released in the UK. 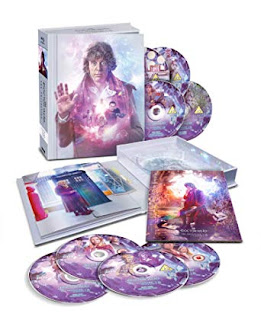 One week later we get the Season 18 Blu-Ray box-set. This I have already pre-ordered, as I have already bought the Seasons 12 and 19 sets.
Something else I will be buying as soon as it comes out is the animated The Macra Terror, due on 18th March. I will make do with the DVD version - don't see the point in buying animation in HD -  and I certainly don't want to watch a colour version of the story.
If you bought the DWM Yearbook recently you will have seen a feature on the Blu-Ray box-set releases. I was pleased to read that they will be releasing the first 6 seasons (the B&W / missing episodes era), as well as the colour ones - and they don't intend to leave them until the end.
My understanding is that the next two sets to be released after Tom Baker's final one will be the 10th, with Jon Pertwee's Doctor, covering The Three Doctors to The Green Death, and the 26th - Sylvester McCoy's final season (and indeed the final classic series season), comprising Battlefield to Survival.
The article got me thinking about what the Seasons 1 - 6 box-sets might look like. The two most complete seasons, as far as what's left in the archives is concerned, are William Hartnell's second season (Planet of Giants to The Time Meddler) which is only missing episodes 2 and 4 from The Crusade, and Patrick Troughton's final season (Season 6 - The Dominators to The War Games), which is missing 7 episodes.
Parts 2 and 4 of The Crusade exist as telesnaps, so could be released in that way alongside the off-air soundtrack, or they could be animated.
As for Season 6, the seven missing episodes comprise two from The Invasion (already animated for its DVD release) and five of the six parts of The Space Pirates. The latter poses a problem, as there are no telesnaps available for the missing five episodes and the story has very little in the way of photographic references - making animation nigh on impossible.
And what of Seasons 1, 3, 4 and 5? Well Season 1 is also very well represented in the archives. The only missing episodes are two from The Reign of Terror (already animated), and the 7 episodes which comprise Marco Polo. Six of the Marco Polo episodes exist as telesnaps, but the problem lies with the middle episode. It had a different director, who opted not to purchase these off screen images. However, unlike The Space Pirates, we have a wealth of photographic material from this story, so animation or representative images could be used to accompany the soundtrack.
Seasons 3 - 5 pose far greater problems, as this is where the bulk of the missing episodes are to be found, and fewer stories have telesnaps available.
Material currently available for Season 3 includes: Episode 3 of Galaxy Four (plus a 5 minute chunk of Episode One); Episodes 2, 5 and 10 of The Daleks' Masterplan; The Ark; Episode 4 of The Celestial Toymaker; The Gunfighters; and The War Machines. That's just three complete stories, plus 5 orphan episodes. As far as telesnaps are concerned, only The Savages has these.
From Season 4 we have: The Tenth Planet; Power of the Daleks (animated); Episodes 2 and 3 of The Underwater Menace; The Moonbase; The Macra Terror (animated); Episodes 1 and 3 of The Faceless Ones; and Episode 2 of Evil of the Daleks. That's four complete stories (thanks to animation in every case) plus 5 orphan episodes. Luckily, this time all the missing episodes / stories are covered by telesnaps.
And from Season 5 we have: Tomb of the Cybermen, Episode 2 of The Abominable Snowmen; The Ice Warriors; Enemy of the World; all but Episode 3 of The Web of Fear; and Episodes 3 and 6 of The Wheel in Space. That's 3 complete stories (4 if you count Web as being almost complete) plus 3 orphan episodes. Again, we have telesnaps for all the missing episodes / stories.
Enemy of the World got a Special Edition re-release, with extras, and I have been expecting The Web of Fear to get the same treatment, with the missing third episode animated.
I assume that more episodes will be getting animated - either complete stories such as they have done with The Macra Terror, or sets of episodes which will complete those stories which are partly covered in the archives. There is also that slim chance that other missing episodes are rediscovered.
It will be interesting to see just what the 1963 - 1969 Blu-Ray box-sets eventually look like.
Posted by GerryD at 23:05