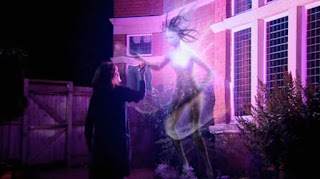 An amphibious species from the planet Arcateen V. One of the race we encountered was a benign Star Poet who had been helped by Sarah Jane Smith. She had assisted the being in returning home, and by way of thanks it gave her the means to later defeat the Bane Mother. It was witnessing Sarah and the Arcateenian together one night which set Maria Jackson on her course to become one of Sarah's companions. 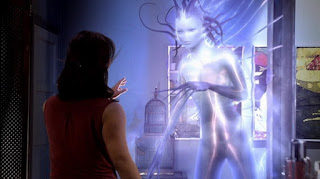 The species were not all so friendly, however. One of the creatures was being transported as a prisoner when it and its captor arrived in Wales in the early part of the 19th Century. The Arcateenian criminal killed its guard and was then able to hide itself within a young woman named Mary, giving her an extended lifespan. This involved devouring human hearts. When the body of one of her victims was found in a field just outside Cardiff, along with the transporter unit, Mary had to infiltrate Torchwood to get the device back. Mary befriended the lonely Toshiko Sato, giving her a pendant that was an alien artefact - enabling her to read other people's thoughts. The two women embarked upon a sexual relationship. Captain Jack Harkness realised that something was wrong with Tosh. When Mary broke into the Hub and threatened to kill Tosh, Jack gave her the transport device back - but he had programmed it to carry her into the heart of the Sun.
The Twelfth Doctor encountered an Arcateenian hearse, piloted by a Tivolian named Prentis. It was he who claimed the species were amphibians.