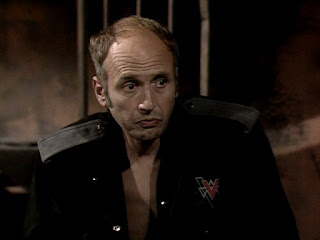 Arak formed a double act with his wife Etta, as they commented on the activities of the Sixth Doctor and Peri in the Punishment Dome on the planet Varos. Arak worked in the Zeiton mines, and like the rest of the population settled down to watch a diet of torture and death on the view screens at the end of a long shift. His was not a happy marriage. When he cast Etta's vote for her she threatened to report him, and it looked as if he really believed she would. The Doctor and Peri joined forces with the rebel Jondar and together they managed to smash the political system on Varos. The Governor discontinued the broadcasts, and Arak and Etta were left wondering what to do now. With increased prices being paid for the Zeiton ore, no doubt Arak would have an easier time of it from now on. Whether or not he and Etta were any happier is another story.