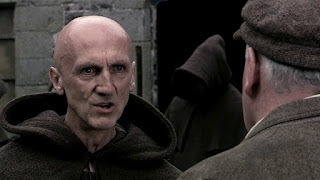 Abbot of the monastery which lay in the Glen of St. Catherine, near Torchwood House in North East Scotland. The Brethren have turned their backs on Christianity, and for many centuries have worshiped a wolf-like alien life-form. Every couple of decades, the Brethren would kidnap a local child who become host for this life-form. When the time is right, a powerful personage would be infected, so that the wolf could take over the country, and ultimately the planet.
Father Angelo decided that the next host would be Queen Victoria, who regularly visited the area. He led his monks to Torchwood House with the current host, a young man. The monks were specially trained in martial arts. They took over the House, Angelo pretending to be a butler, whilst the other monks acted as servants and stationed themselves around the building to ensure no-one would escape. The owner, Sir Robert MacLeish, was forced to co-operate as his wife and servants were held hostage. To control the wolf, and protect themselves, they had conditioned the creature to have an aversion to mistletoe.
Angelo was shot dead by the Queen, as much for his disrespect towards her as the threat to transform her into an alien werewolf.