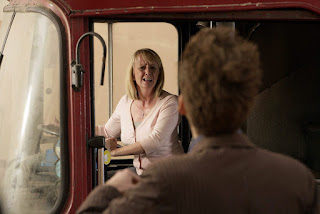 Angela Whitaker was a passenger on the 200 bus to Victoria, London, on a fateful Easter Saturday evening. The Doctor was also on board, investigating rhondium particles. These emanated from a wormhole which opened in a road tunnel beneath the Thames - which the bus passed through. Angela and her fellow passengers found themselves stranded on the desert planet of San Helios.
Her only concern was to get back home to her daughter Suzanne and her husband Mike. Angela was put in charge of running the bus' engine. She blamed herself when the vehicle ran out of fuel.
The Doctor was able to get her back to London after salvaging anti-gravity clamps from a Tritovore spaceship to fly back through the wormhole.