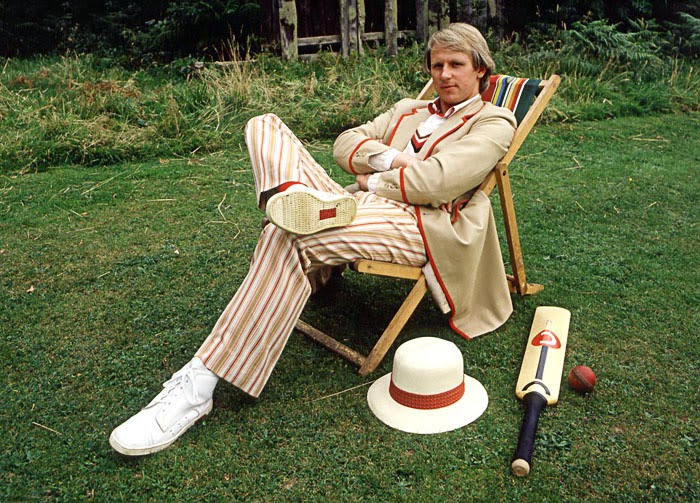 In which the TARDIS materialises on the railway station platform at Cranleigh Halt, in June of 1925. The Doctor and his companions are surprised to discover that they are apparently expected, as they are approached by a waiting chauffeur. Nyssa notices him staring at her. The Doctor has been mistaken for someone who is to take part in a cricket match. With the prospect of a few innings on offer, the Doctor decides not to correct the mistake. They are taken to the cricket pitch where they meet Charles, Lord Cranleigh. He is shocked to see Nyssa - and it transpires that she is the spitting image of his fiancée Ann Talbot, hence the earlier reaction of the chauffeur. The Doctor joins the game and helps to win the match. He and his companions are then invited to stay at Cranleigh Hall for the rest of the weekend. A fancy dress party is planned. At the Hall they learn that Lord Cranleigh is the brother of the famous botanist George Cranleigh, who discovered a rare black variety of orchid in South America. He died during the expedition. Elsewhere in the house, in a closed off wing, another occupant is kept a virtual prisoner. He is badly disfigured and is tied to his bed. He is looked after by a Brazilian servant named Latoni. The man escapes his bonds and knocks Latoni unconscious. Whilst the Doctor is taking a bath, the man enters his room via a hidden passage and steals his harlequin fancy dress costume. The Doctor finds the passage himself but gets hopelessly lost. He emerges in the sealed off wing and finds the corpse of another servant hidden in a closet. 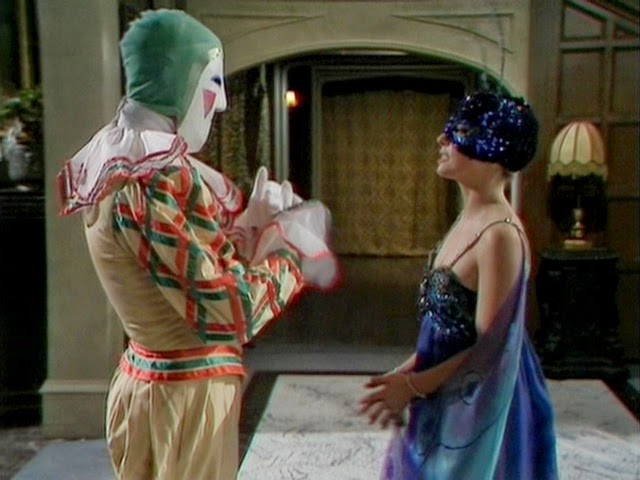 Lady Cranleigh, mother of George and Charles, has been informed by Latoni of the escape of the man and she finds the Doctor in the wing. She agrees to inform Sir Robert Muir, local police commissioner and another guest for this weekend. Ann Talbot is in the house when she sees what she thinks to be the Doctor in his costume. He attacks and kills the butler then tries to seize her. She faints. On waking, she blames the Doctor for the crimes. Lady Cranleigh decides to lie about the finding of the body earlier, and it has been removed before the Doctor can show it to Sir Robert. He and his companions find themselves under arrest. They are taken to the village. The TARDIS has been brought to the police station. In order to help prove that they are who they say they are, the Doctor shows Sir Robert and the local constabulary the inside of the ship. They use it to travel to the Hall. The captive man has escaped again, killing Latoni. He starts a fire in order to break down his door, and this starts to spread. He seizes Nyssa - believing her to be Ann. The man is really George Cranleigh. He had been horribly tortured by the natives who protect the Black Orchid, and was brought back secretly to England by Latoni - broken both in mind and body. Ann had originally been his fiancée. Charles and the Doctor are able to convince him he has the wrong person. George slips and falls from the roof to his death. The Doctor and his companions decide to stay on for his funeral. The Doctor is given a copy of George's book as gift - "Black Orchid"... 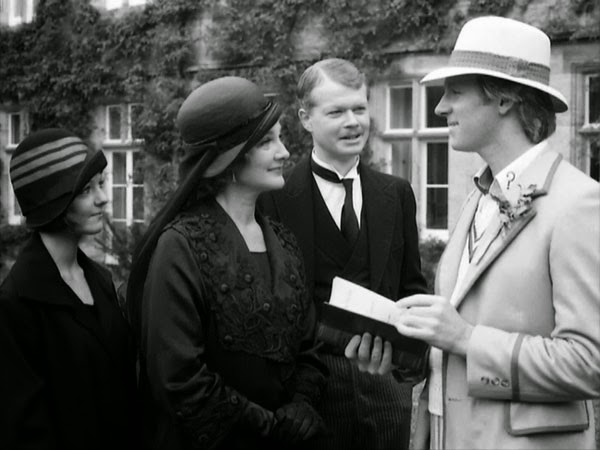 This two part adventure was written by Terence Dudley, and was broadcast on the 1st and 2nd of March, 1982. It is the first two-parter in the series since The Sontaran Experiment, back in 1975. It is also - arguably - the first purely historical story since The Highlanders (and indeed the last of such to date).
Generally historical stories have fitted into three categories. The first are what we now term the "Celebrity Historical" - wherein the Doctor meets someone famous - Marco Polo, Charles Dickens, Shakespeare etc. Then we have the pseudo-historical - where historic events form the backdrop to some alien intervention. This story fits in to the third category, where the history merely forms the backdrop and provides some local colour, in order to tell a story about smugglers, Jacobites, or Aztec High Priests.
Except in a way it doesn't. With those earlier non-celebrity historicals, the period was a key part of the story. With Black Orchid, the historical setting is entirely immaterial. It could just as well have been set in the 1980's or the 1880's. This story is much more of a genre piece - that genre being the country house murder mystery. We are in Agatha Christie territory - except it isn't a whodunnit either. We know from the off that the killer is the bloke tied up in the bedroom. There are no red herrings amongst the house guests. The only mystery is who is he and what is he doing tied up - but that is quite easy to work out the instant we find out about the supposedly dead George.
By making George homicidal and disfigured, he becomes a surrogate monster. You could just as easily have had an alien locked up in the attic. Equating disfigurement with monstrousness is obviously wrong, and would not be done today. Shouldn't have been done then to be honest.
The TARDIS crew finally manage to get out of their standard uniforms thanks to the fancy dress ball. However, I sincerely hope that the Doctor and his companions did not wear their usual clobber to a funeral. We know the TARDIS has a massive costume store, but producer JNT does have this stupid idea about these uniforms. 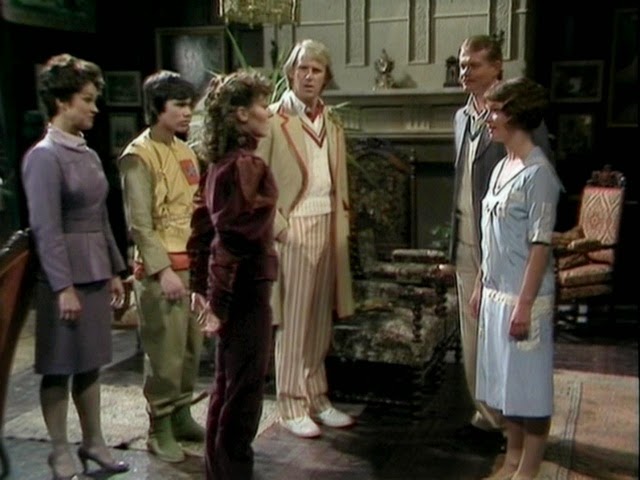 The guest cast comprises Barbara Murray as Lady Cranleigh, Moray Watson (who was in the original BBC Quatermass Experiment) as Sir Robert, and Michael Cochrane as Charles. He also poses for a portrait and a photo of George in the book - suggesting that they might have been twins, though nothing in the dialogue supports this. The disfigured George (credited as "The Unknown" in Part One) is played by stunt man Gareth Milne. Ivor Salter, who had appeared in The Space Museum and The Myth Makers, returns to the programme as Sergeant Markham. Naturally, Ann Talbot is also played by Sarah Sutton.
Episode endings are: 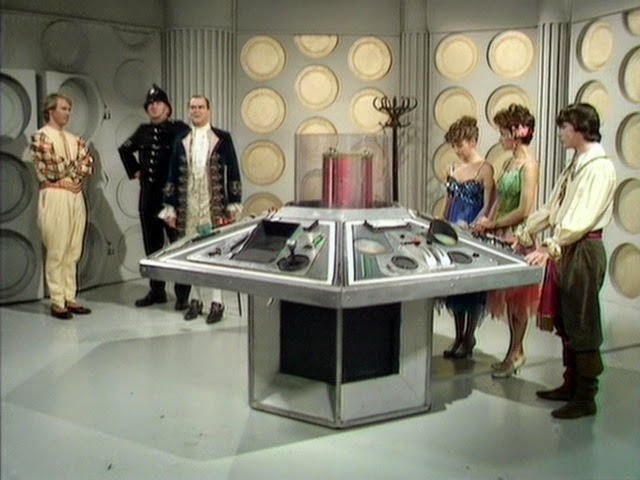 Overall, an atmospheric enough little tale, but one that is wholly disposable. At least the companions get a whole episode of just enjoying themselves for a change. There is a sneaking suspicion that this story exists just to justify Davison's costume.
Things you might like to know:
Posted by GerryD at 21:48