Know Your Cybermen No.1 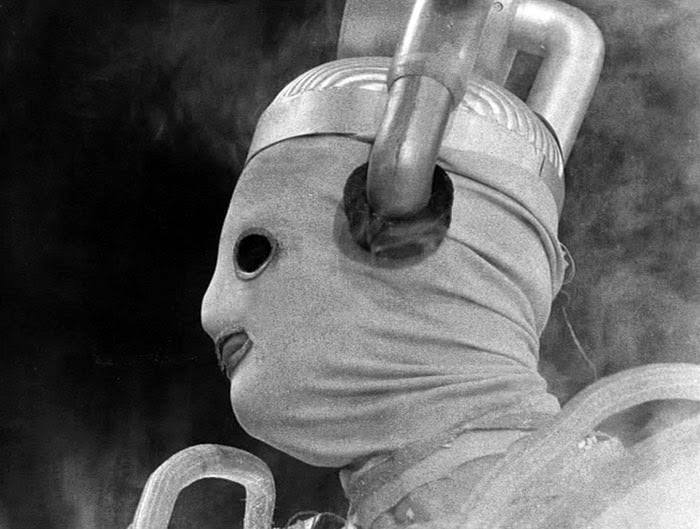 The Tenth Planet (1966).
If you think that The Tenth Planet marks the first ever appearance of the Cybermen then you would be wrong. It is their only appearance, as they differ from what follows in almost every detail.
These are the original inhabitants of Earth's twin world of Mondas. Many centuries ago it left the Solar System - cause unknown - and drifted to the edge of the galaxy. This peripatetic existence led the population to experiment with life-enhancing surgical techniques. Limbs and organs of flesh and blood were replaced with those of metal and plastic. Certain emotions were also found to be weaknesses - and these were also removed.
In December, 1986, Mondas returned to the Solar System. Cybermen first landed at the Snowcap Space Tracking Centre at the South Pole, which is where the TARDIS crew had recently turned up.
In appearance they are all over 6 feet tall, covered with a flexible but extremely strong material - capable of deflecting bullets. They have a bulky accordion-like attachment on their chests which appears to act as their heart / lung functions. Beneath this hangs a circular object in a rectangular frame which turns out to be a weapon. Their hands are still human looking, though they have great strength and can twist a machine gun 90 degrees.
On top of the head is a barrel-like lamp, connected to the skull by three tubes - one at the rear and two on either side of the head.
They appear to have retained their humanoid skulls under their faces. The eyes are black discs. When they speak, their mouths open but their lips do not enunciate their words. A strange electronically treated voice issues. The Cybermen appear to be doing this for the benefit of the humans, and they may not speak in anything but machine code at other times. Tubing extends around the body - carrying hydraulic fluid or some other substance. Joints are reinforced with metal bands.
These Cybermen have names, and individuality still seems to be important to them. They try to gather biographical data on the humans who they plan to convert. 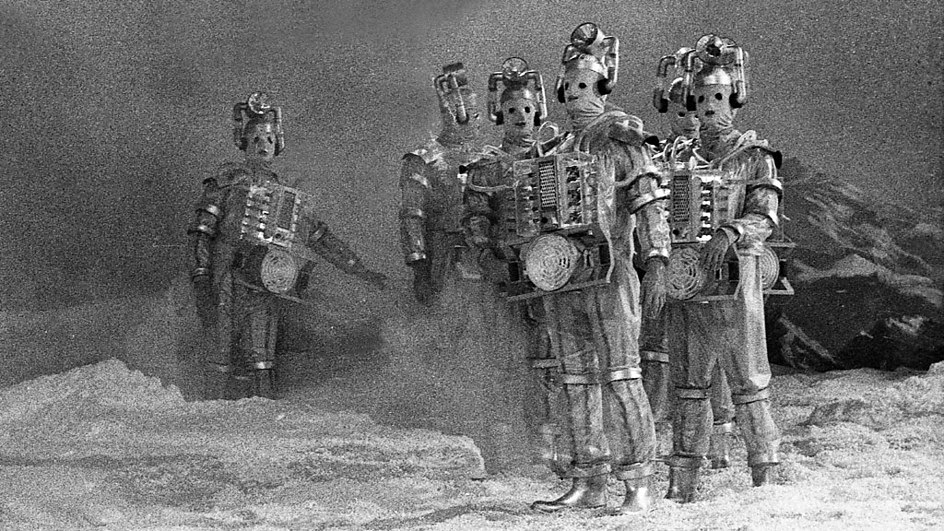 Mondas is Earth's twin and, despite its itinerant wanderings, the continents have developed identically to Earth's, although the planet is inverted - the poles being at opposite ends to ours. It is never clear whether the planet's return to the Solar System is a natural phenomenon or if it has been artificially guided here. This will be clarified only in subsequent stories. The planet has the ability to drain energy - including bio-chemical. When this process starts to run wild, the Cybermen suggest that they have no power to stop it, so it may be a natural process, or they are using technology they do not fully understand.
The Cybermen intend to convert all of the Earth's population to become like them, and believe this is the logical thing to do. They believe they are doing us a favour, in other words. When the power drain goes out of control, they decide that the Earth must be destroyed - sacrificed to save Mondas.
When Mondas is destroyed, all of the Cybermen on Earth collapse and die. Their power source has not been transferred to this planet. Why they have no in-built power source, such as batteries, is never explained. When they die, their bodies collapse in on themselves - as though the organic components have wasted away.
This is quite categorically the end of Mondas and of the Cybermen who lived there.

Story Notes:
Interestingly, in March 2015, a BBC Horizon programme mentioned the theory that a planet had been knocked out of the Solar System millions of years ago - but it was an Ice Giant, neighbouring Saturn, and not a rocky Earth-like world.
A twin of Earth on the far side of the Sun had been one of the earliest story ideas for Doctor Who back in 1963. Here, everything would have been backwards.
Co-writer of The Tenth Planet, Dr Kit Pedler, was a leading ophthalmologist who was brought in to act as a sort of scientific adviser on the show. He was worried about the moral implications of transplant surgery. If you replaced too much, would you still be human? He originally envisaged the Cybermen as "star monks". Design wise, he wanted the limbs to be transparent, and for their heads to be in the centre of their bodies.
As the fourth episode was being written, Pedler fell ill and his fellow writer Gerry Davis wrote the ending. This is why the Cybermen stop philosophising and become more generic alien invaders in Part Four.
Though never explicitly stated, it is Mondas' power drain that leads to the Doctor regenerating for the very first time - though that term won't be heard for a few more years. The following story will simply say that he has been "renewed", with the help of the TARDIS.
This particular design of Cyberman was the one used throughout the 1960's comic strips, where you might have seen them on skis.
Neil Gaiman had hoped to include an original Cyberman as part of the Cyberiad in his Nightmare In Silver.
Realising that they finally had a menace to equal the Daleks (one they didn't have to pay extra for), producer Innes Lloyd commissioned a follow up Cyberman story almost at once - as we will see next time...
Posted by GerryD at 00:26