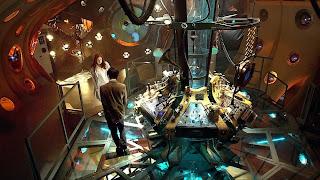 By the time we get to Edge of Destruction we have already learned quite a lot about the TARDIS. Here then is an introduction to the Doctor's Space - Time machine, in 20 easy steps.

1. It's bigger on the inside. We have to wait until the Pertwee era for it to be termed "Dimensionally Transcendental". The interior exists in a different dimension to the exterior shell - the doors providing an interface between the two. As such it can be as big as you like inside. The full extent of the Doctor's ship has never been defined, though we know it used to be bigger. In Castrovalva he jettisoned 25% of the mass in order to provide the thrust needed to escape one of the Master's traps. Romana's bedroom, and one of the swimming pools have also been jettisoned. There is a lovely scene at the start of Robots of Death where the Doctor explains the size issue using two cubes - one bigger than the other. When it's further away, the larger box appears as though it could fit in the nearer, smaller one. 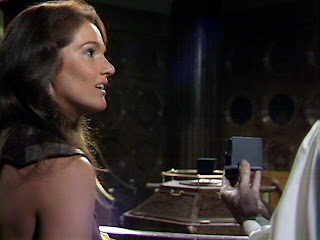 2. It can change its appearance to blend in with its surroundings. This is achieved by the Chameleon Circuit. Unfortunately, the Doctor's circuit broke down when he landed in London 1963. It was obviously already on the blink, as Police Call Boxes were already heading for obsolescence at this time, and why would a Police Box blend in in a junkyard? It wasn't until Attack of the Cybermen, that the Doctor attempted to fix it. It still didn't work. 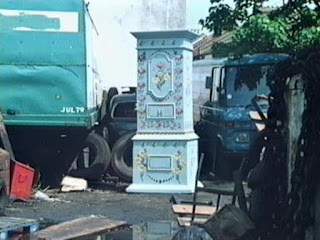 2(a). The TARDIS does not have a cloaking device - no matter what the eighth Doctor says...

3. It has a Fault Locator. Seen only in the earliest stories, it is a massive machine to the side of the control room. I suppose it is so big because so many things tend to go wrong.

4. There are several control rooms. We don't know how many - as some of them may be the same room redecorated. Up until Masque of Mandragora we assume it is the same control room which the Doctor has been using - redecorating occasionally. In this story we see the secondary wood-panelled control room. 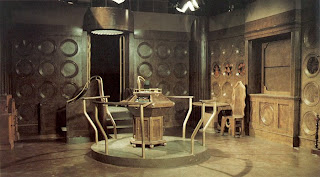 The second and third Doctors appear to have used it in untelevised journeys - as they've left stuff behind. In Time Crash the fifth Doctor refers to the decor as the "desktop theme". In The Doctor's Wife we learn that the TARDIS has stored all the previous control rooms in an archive. Control rooms can be moved around within the ship - so that the main doors always lead in and out of them.

5. It has a library. Seen just off the control room in The Movie.

6. It has a swimming pool. More than one apparently. Seen in The Invasion of Time.

7. Power source. In Edge of Destruction the Doctor says that the power source is located beneath the console, and its strength is indicated by the rising and falling of the time rotor. In The Mind Robber we find that the ship has a Power Room near the control room. 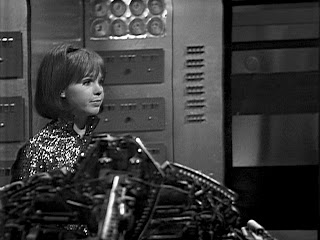 In The Movie, the ship appears to be powered by the Eye of Harmony (or a fraction of this, as it should be buried deep beneath the Panopticon on Gallifrey). In The Runaway Bride the Doctor tells us that Huon particles have some role to play in the TARDIS power systems.

8. The Cloister Room. Seen for the first time in Logopolis this is a quiet corner where the Doctor can ruminate to his hearts' content. 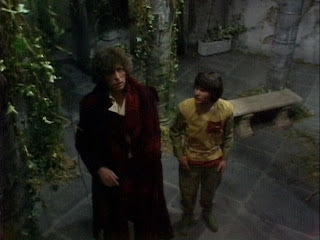 It is the location of the Eye of Harmony in The Movie. The Cloister Bell is an alarm - sounding only in the gravest of emergencies.

9. Bedrooms. In the early days, companions had fold down bunks to sleep on. 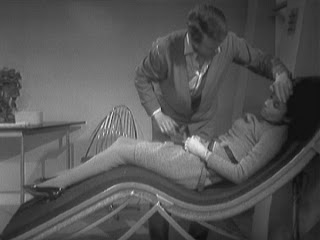 Later companions would get a proper room to themselves. Nyssa had a little laboratory in hers. There may be a limited number of bedrooms - as Turlough was offered Adric's old room instead of a vacant one.
Amy and Rory had to put up with bunk beds until their room got jettisoned.
We have never seen the Doctor's room - he may not even have one. Perhaps he only ever catches 40 winks in the control room. In Planet of the Daleks he had his own bed unit in the control room. Very IKEA. 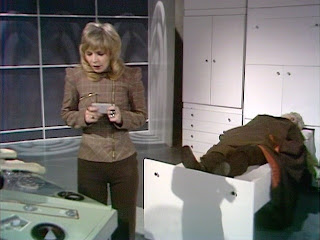 10. There is a clothes store, with costumes from many different planets. Romana is able to pick up a Taran outfit which perfectly fits the era they visit. The Doctor gets his own outfits from here each time he has regenerated. 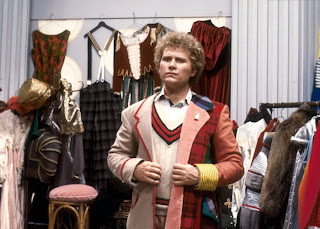 Strangely, we have never seen the Doctor use any of the costumes himself when he lands on an alien world - nor does he encourage his companions to use them, apart from a couple of occasions. Indeed, when have we ever seen him pick up a costume to add to the collection?

11. Telepathic Circuits. Used by Jo to bring the Doctor back aboard the TARDIS after he has been ejected into the Temporal Vortex in The Time Monster. Seen again when the injured Doctor sends a message to the Time Lords after the events of Frontier In Space. 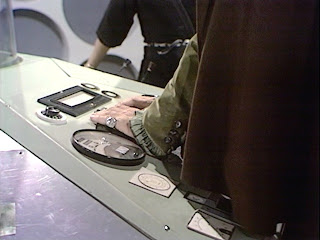 12. The ship is in a state of Temporal Grace. Meaning that you are not supposed to be able to use guns or other weapons when in flight. This was stated in The Hand of Fear when Eldrad tried to harm the Doctor. Nyssa certainly believed this to be the case and was surprised that Cyberguns worked in the ship. 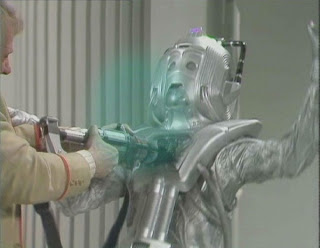 If it did ever work, it was just a fib by the time of Let's Kill Hitler.

13. How do people breathe in the TARDIS? Planet of the Daleks suggests that the ship draws its air from the outside - which is why the Doctor almost suffocates when the ship is smothered by alien fungus. He brings out an emergency oxygen supply - but hasn't kept it replenished. 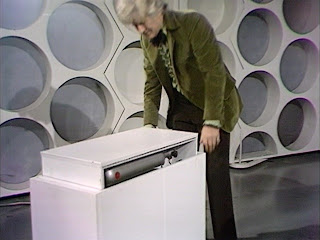 If the ship does indeed need to land and replenish the air supply - like a whale surfacing every so often - how do the occupants survive long journeys?

14. People who travel in the TARDIS become saturated by harmless Artron Energy. The Doctor had high levels of this as noted by Co-ordinator Engin in The Deadly Assassin (he's surprised as most Time Lords travel only occasionally, if at all). It is Artron Energy which Rose unwittingly uses to revitalise the lone Dalek, and Mickey to activate the Genesis Ark in Doomsday.
It is also Artron Energy that causes the daughter of Amy and Rory to be conceived part Time Lord. 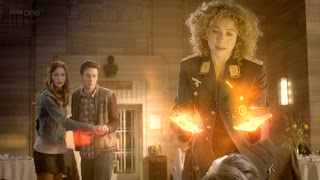 15. The TARDIS lock. No ordinary Yale lock, despite appearances. Susan says that there are 20 false permutations which melt the lock as a defence mechanism. In The Sensorites the eponymous aliens steal the lock. The Doctor states that forcing their way in would destroy the dimensional stability of the ship. 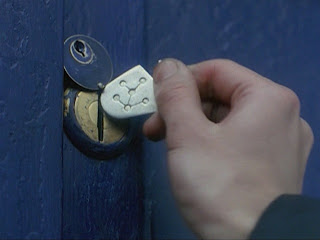 For The Movie, a different key opens the lock, which has a fake façade. With the new series, it has reverted to an ordinary latchkey.

16. Defence systems. In The Krotons, we see the HADS in action - Hostile Action Defence System. The ship relocates a safe distance away when attacked. When faced with impending break up, as in Terminus, the ship latches onto the nearest vessel. The ship is incredibly hardy, surviving falling down mountains, direct hits by V2 bombs and immersion in the power source of the Dalek Crucible.

17. Take off / landing. The TARDIS generally materialises and dematerialises, passing in and out of the Temporal Vortex. On occasion, however, it can take off and fly in more conventional style. It descends from the sky in Fury from the Deep, and in the new series has been seen flying on many occasions. 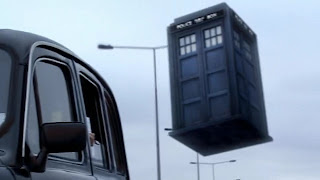 18. The scanner. The camera which feeds the scanner appears to be housed in the lamp on the roof (the Doctor asks Susan to step back so he can see her more clearly at the end of The Dalek Invasion of Earth). Cut dialogue from The Sensorites stated that the image was monochrome. Initially the scanner was a TV monitor on the wall, but it later became a much larger mechanism built into the wall (it's in one of the roundels in Claws of Axos). According to Full Circle the scanner shows what ought to be outside - not what really is.
By the ninth Doctor, the scanner was another TV monitor hanging above the console. (It could get all the sports apparently). The eleventh Doctor's TARDIS has two scanners - the one above the console, and a large circular one on the wall near the doors. 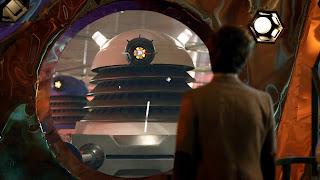 19. The Zero Room. A negative space free of any technological influence, which Time Lords can use to aid the regeneration process. The Doctor was able to levitate in his. Unfortunately the room was jettisoned in Castrovalva, but the remaining doors were imbued with the same properties. 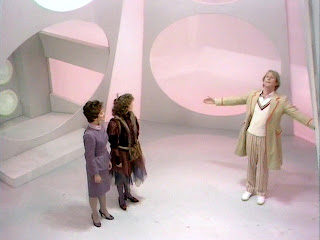 20. Sentience. Last, but by no means least, the TARDIS is no mere machine. It is a living thing with a "soul" of sorts - a sentient matrix. In Edge of Destruction it is able to send messages to the travellers to prevent their destruction. These were not just mechanical actions - it could affect their minds and make clock faces melt. When the Doctor explains about the Telepathic Circuits in The Time Monster he clearly states that "she" is a living thing. The Doctor always identifies the TARDIS as feminine - going so far as to call her "Sexy" when alone...
The Doctor's Wife finally establishes the true nature of the Doctor's relationship with the TARDIS when it's matrix is transplanted into Idris. We learn that the ship chose him as much as he chose it - wanting to explore the Universe as much as he did and deliberately leaving its doors unlocked so he could steal it. Its erratic navigation is also explained, as the ship takes him to where he needs to be rather than where he always wants to be. 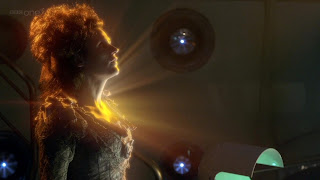