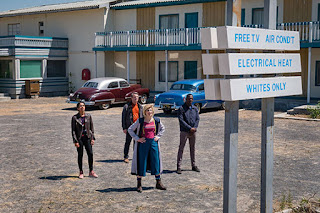 The problem with the historical stories - if they were of the 'celebrity' kind - was that you knew roughly how things would work out in the end. There was no doubt that history would be kept on course in Rosa - the entertainment was in seeing how the Doctor would ensure that it went the way it should without getting too involved herself. I've known for some time that this story was in the pipeline, as the bus had been seen and photographed on location and it was recognised, as the real vehicle now resides in a museum. My big worry was that the Doctor would take too much of an active role in ensuring Parks made her protest, which would have undermined the real bravery of the real person. Luckily this was not the case, as the Doctor and her companions worked to keep history on course without Parks having any inkling of the plans to stop her.
Let's get the negatives out of the way first. Actually, there was only one real negative for me, and that was the villain, Krasno. It seems his motivation was simply that he was a racist. Having him hail from the 79th Century made this a little hard to swallow. The series has repeatedly told us that the human race will be interbreeding with all manner of aliens long before then, so Krasno's specific problem with black people just didn't sit right. He was also pretty inept, losing his equipment rather easily, and then simply being dismissed from the plot as soon as his usefulness was up. You also have to ask why he didn't simply remove Rosa from her time, or zap her friend Martin Luther King into the past. At least they came up with a reason for why he couldn't kill them. 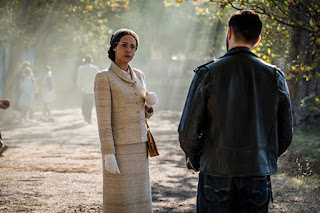 I was much more impressed with the regulars this week - including the Doctor. I was glad to see that some of her goofiness had been reined in, as befitted the seriousness of the story's subject matter. All three companions had equal weight in the plot, with the younger two having a lovely scene by a dumpster where they discussed how things had changed for the better by their time, but there was still a lot of racism in the world. (If anything, racism is on the rise again in Europe and the USA). I particularly loved Bradley Walsh's performance, as he realised that he had become the white man for whom Parks was asked to relinquish her seat. Parks' protest arose out of inaction, rather than action, and this is what the Doctor and her companions were forced to do. They had to do nothing once they were on that bus.
Younger viewers will have missed a monster this week, but there were monsters on screen - the racist citizens of 1955 Montgomery, Alabama.
As someone who was familiar with Rosa Parks and her story, I didn't need the lecture, but I suspect that a great many people watching will have been educated by this episode. I normally don't like being preached at, but in this instance anything that can make people sit up and take notice of racism and the history of the civil rights movement is fine by me. It is rather shameful to consider that co-writer Malorie Blackman is the first writer of colour to have ever been asked to write for the programme, and still one of only a handful of women writers. Chibnall is certainly shaking things up on the diversity front, both on screen and behind the scenes, and long may he continue to do so.
Unusually, the end titles were run with the song which had accompanied the climactic bus scene, rather than the theme music. This song, Rise Up, is by Andra Day.
Overall, a powerful story which will hopefully prompt some discussion.
Next week, we are back in present day Sheffield with a story about spiders. It promises to focus more on Yas, as we get to meet her family.
Posted by GerryD at 23:05