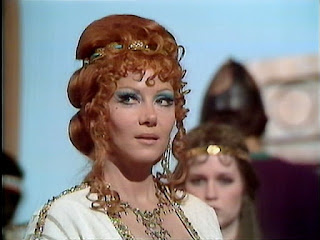 Galleia was the wife of King Dalios, and Queen of Atlantis. She was much younger than her husband, and had taken a young nobleman named Hippias as a lover. When the Master appeared in the city Galleia switched her attentions to him. He had brought back the missing High Priest Krassis, and spoke of restoring Atlantis to its former glory. The Master seduced her, and on his recommendation she sent Hippias on a reckless mission to steal the Great Crystal of Kronos from the Temple of Poseidon, where it was guarded by a Minotaur. This resulted in the young man's death. Galleia then assisted the Master in staging a coup, taking him as her new consort. When the Doctor and Jo Grant revealed that the old king had died in the palace dungeons, Galleia turned against the Master - as she had not wished her husband harmed. However, the Master released the captive Chronovore Kronos, and it destroyed Atlantis. Galleia perished in its ruins.