F is for... Functionaries 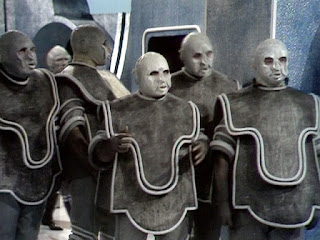 A servant class on the planet Inter Minor, of a different, though related, species to the dominant humanoid lifeform. They had grey hairless skin, and dressed in grey identical uniforms.
Though treated like slaves, they did have some rights - such as obligatory rest periods from their duties, such as manning the Eradicator Gun. There was some dissent amongst them, which had alarmed the government of President Zarb. he believed the cause to be from lack of diversion, and so permitted the lifting of an embargo on alien visitors which had been in place since a deadly space plague had ravaged the planet. The first to be admitted were a pair of Lurman entertainers, who witnessed one of the Functionaries ascending to a level of the space port from which they were banned, and begin to make a speech to its colleagues. It was shot down by the Official Kalik.