G is for... Galloway 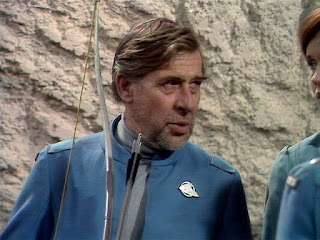 Dan Galloway was a member of the Marine Space Corps mission to the planet of Exxilon. They had come to obtain supplies of the mineral Parrinium, which was needed to combat a terrible space plague. A bluff Scotsman, he could be devious and temperamental. His commander - Stewart - did not trust him to take over the mission on his death, but Galloway decided to keep this fact from his colleagues and took control once Stewart died from his wounds. He immediately attempted to forge an alliance with the Daleks, who had come to the planet for the same reasons. He angered his colleagues by agreeing to hand over the Doctor to the Daleks in order to obtain the mineral. Once the Daleks armed themselves with weapons which were not affected by the power drain coming from the Exxilon city, Galloway found that he was as much a prisoner as the others. He and Lt. Hamilton were despatched to climb the energy-draining beacon atop the city and plant bombs. Galloway kept one of the explosives back, and later smuggled himself aboard the Dalek ship - blowing it up, with himself still aboard, before it could fire plague missiles onto the planet.

Played by: Duncan Lamont. Appearances: Death to the Daleks (1974).