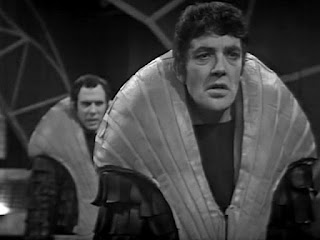 The first story of Doctor Who's sixth season sees the final contribution from Mervyn Haisman and Henry Lincoln. A third Yeti story was in the pipeline - possibly designed to write out Jamie - but ill feeling resulting from this story put a stop to that.
The story opens with a direct link to the set of repeats that were shown over the summer break between seasons - a reshowing of The Evil of the Daleks - as the Doctor states he needs a holiday after generating the mental images which we saw him introduce at the conclusion of The Wheel In Space.
Haisman and Lincoln's principal inspiration in writing The Dominators is the Daleks. They had seen how much money Terry Nation had made from his creations, and thought they could come up with something similar. Basically, they hoped to make some cash from merchandising their new robotic enemies - the Quarks. They were particularly upset when the Quarks did indeed later appear in spin-off material - namely the Polystyle comic adventures of the Second Doctor. The writers claimed a share of copyright, but the BBC insisted they didn't qualify. Haisman insisted that the design of the Quark was their's, but this was also challenged, and the BBC showed that the design as seen on screen was not like the sketch produced by the writers. 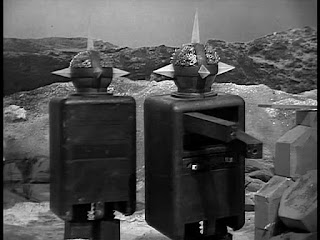 The name "Quark" probably derives from the elementary particles which go to make up neutrons and protons. No-one has ever observed these, and they are only known through how the hadrons which they combine to make behave. There are different types - or flavours - of quark, with very odd names. The "up-type" include Up, Charm, and Top, whilst the "down-type" include Down, Strange and Bottom. Their existence was disputed until experiments in 1968, and the top flavour wasn't discovered until 1995.
The word "quark" is much older - pertaining to a type of soft cheese popular in northern Europe. The Roman writer Tacitus mentions it, as lac concretus, and the actual name became attached to the product in the Middle Ages, coming from the Slavic twarog. 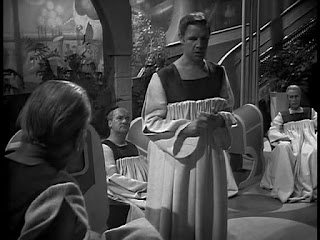 Regarding the actual story itself, the inspiration appears to derive from an ill-disguised contempt for the ideals of pacifism. We've seen a pacifist society before in the programme - way back near the start with the Thals. They had turned their back on violence as they had seen how war had destroyed their planet. However, the Doctor's companion Ian demonstrates to them how they will still fight if they have to, as he provokes the new leader Alydon into defending his betrothed. In The Dominators, the aptly named Dulcians are pacifist by nature. They have never suffered a war. They were horrified by the results of atomic testing some 70 years ago, and this seems to have been enough to put them off ever waging war. When presented by an invasion by the equally aptly named Dominators, their leader Senex offers to co-operate and to acquiesce. If the aliens want their mineral wealth then they can just take it. Tensa, the chairman of the emergency committee, gives the ruling council some options. The council refuse to accept either willing enslavement or fighting back. Unlike the Thals, the Dulcians won't stand up and fight for their survival. The writers present this as a mistake. Pacifism is something that just does not work in the real world. There will always be threats, and people should stand up to these. It should be remembered that only one generation before, the British Government had chosen Appeasement when confronted by Adolf Hitler's territorial expansion plans. Appeasement had been supported by pacifists and by fascist supporters within the Establishment. Prime Minister Neville Chamberlain was soon forced to step aside when it was clear that Hitler was going to simply invade the rest of Europe anyway. We went to war, and Chamberlain was replaced by Winston Churchill. 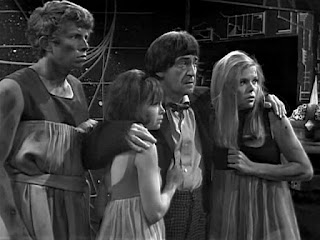 One of the Dulcians does think it right to fight. He's Cully, the rebellious son of Senex. We also meet a number of Dulcian students, who get caught up in the Dominator invasion of the atomic test island. Rebellious students were newsworthy in 1968, as student movements around the globe demonstrated and fought with police and army. In the US, the demonstrations were primarily directed against the Vietnam War, whilst in Brazil and Mexico they were aimed at their respective fascistic governments. Closest to home were the demonstrations in Paris, where students were also opposed to the Vietnam War but were further seeking wider politico-social changes, as they allied with trade unions and other groups. Other student demonstrations in Eastern Europe were directed against Soviet empire building.
These political upheavals marked the death knell of the more idealistic Hippie movements of the previous few years. It is no secret that Haisman and Lincoln were disdainful of the Hippie movement. 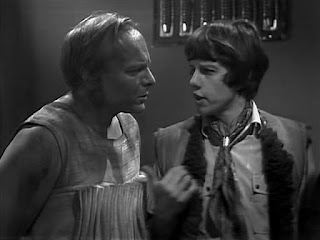 We've already commented on the aptness of the alien races' names in this story. Did the Dominators always set out to dominate, and were the Dulcians always committed to peace and quiet from their very origins? The parents of the council leader clearly expected their son to live to a grand old age by calling him Senex. It is Latin for a man of old age, and where we get our word "senile" from. Tensa also comes from Latin - meaning a chariot which carried images of the gods. In the Chamicuro language of South America it means "milk". It is also a town in the Indian state of Odisha.
Cully means "friend". The elderly tutor to the students - Balan - has a name which is far from apt, as in India it means "boy" or "youth".
It should be mentioned now that Haisman and Lincoln only actually wrote the first four episodes. The script editor, Derrick Sherwin, was not happy with the scripts and advised the writers to stop after the fourth episode. There were supposed to be six parts, but Sherwin didn't think the story stretched that far. He stepped in and wrote the fifth episode in order to wrap up the story. This would have a knock-on effect for the subsequent four part story. Haisman and Lincoln refused to write for the programme ever again - so Jamie never got to get back to Scotland to help defeat the Yeti and the Great Intelligence for a third time, and to become the Laird of McCrimmon.
In the comic strips, the Quarks were independent enemies, with no mention of their Dominator masters, and they embarked on a series of bizarre adventures with the Doctor and Jamie - including a scheme involving the growing of giant killer wasps.
Next time: a story which technically never happened, as we try to sort Fact from Fiction...
Posted by GerryD at 22:36