D is for... Dalek Saucer Commander 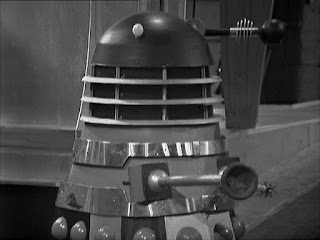 An officer class of Dalek in charge of their spaceships during the invasion of Earth in the mid 22nd Century. It was distinguishable by having a black dome, with alternating black and silver skirt panels. The Saucer Commander was seen at their landing site at Chelsea Heliport, where it oversaw the arrival of prisoners, and presided over the Robotising process aboard the vessel. Later, the Dalek Supreme took personal command of its own saucer.

Appearances: The Dalek Invasion of Earth (1964).

Email ThisBlogThis!Share to TwitterShare to FacebookShare to Pinterest
Labels: A to Z, Daleks