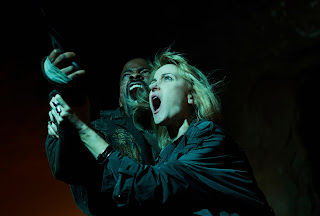 The penultimate episode of the first series of Class is now out there, if you have access to BBC 3 website or the i-player service.
The Metaphysical Engine, or What Quill Did lets us see what Miss Quill got up to whilst the younger characters were stuck in detention last time. Thanks to last week's episode, we kind of knew how this would end - as she now has gotten rid of the Arn parasite and so has free will again. She no longer has to protect Charlie.
The means of removing the Arn were convoluted, to say the least. It involved procuring a couple of items from things which only exist in the realm of Belief - hence the Metaphysical Engine of the title.
The recipe is this. Take the pheromones of an Arn - to be found in their heaven. Get a shape-shifting surgeon, who has been frozen from shape-shifting. Free them by obtaining the blood of his - or her - devil in hell. Then get the brain of a Quill. But as they no longer exist (save for you know who) get it from her goddess in her heaven.
This is all the plan of the Governors, who think that the tears in space / time at Coal Hill are not just the result of frequent TARDIS intrusions but are there for a reason and to be profited from in some way. 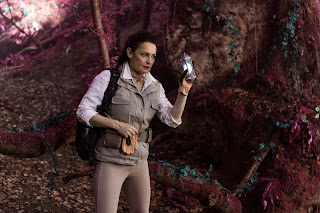 The shape-shifter - Balon - succeeds in removing the Arn. We get to hear about what it was that Quill lost when she was captured. Not just her freedom, but her partner as well. She's a soldier, and so is Balon, so the two of them hit it off. No inter-species mating on view, but we do get to see the post-coital aftermath. They thought they were back at the school, but turns out they were really in the Cabinet of Souls, and duplicitous Dorothea informs them there's only enough juice for one of them to get home. They have to fight each other to the death, which they do - rather than work together to try to both get home. We already know from last week how this will pan out, so this latter segment seemed wholly pointless - except to give Quill something else to get angry about and stop the episode under-running by about 10 minutes. 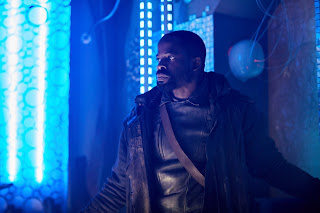 Personally, it has to be my least favourite episode so far. Some nice one-liners from Quill, as to be expected, but the whole thing seemed a bit far-fetched - which is saying a lot from a life-long Doctor Who fan. The idea that the things Quill needed for her cure existed only in various heavens / hells - and the Governors know this, and how to get to them - was a bit of a stretch. The episode also suffered in being totally detached from the Coal Hill setting, which up to now has been the point of the series. It felt like I was suddenly watching a different show - despite the mentions of UNIT and Zygons.
Next Saturday sees the season finale. The Shadow Kin are back, and at least three of the younger regulars all look like they might not make it to the second series.
Posted by GerryD at 23:27