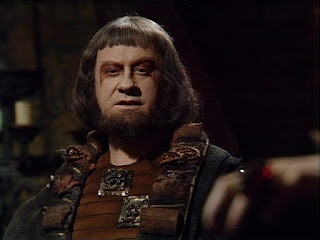 One of the Three Who Rule, on an unnamed planet in the pocket universe of E-Space. Aukon was Chancellor to King Zargo and Queen Camilla. They were vampires. Aukon had once been O'Connor, science officer on an Earth vessel named the Hydrax. They had encountered the last of the Great Vampires - their ruler - and been turned into its servants. The ship entered E-Space where it came to rest on the planet where it was discovered centuries later by the Doctor, Romana, Adric and K9.
Aukon was responsible for selecting villagers to be taken to the Hydrax - now the royal castle - to be drained of blood to feed the Great One. He also sought people who could be turned into vampires to act as servants, but had not found anyone amongst the villagers to fulfill this role. Then he met Adric, and decided that he would join them. Aukon had a psychic link with the Great One, and was able to direct bats to act as his own servants. In many ways he was the more senior of the Three.
The Great One was about to emerge after a long hibernation in which it was healing itself, after being wounded by the Time Lords. Aukon felt it fitting that a Time Lord - Romana - should be sacrificed to mark this event.
When the Doctor destroyed the Great One, Aukon and his fellow vampires crumbled to dust.