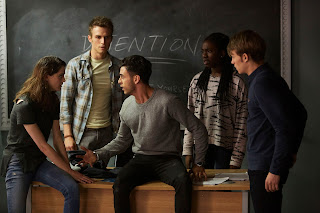 The latest episode of Class has now been put up on the BBC i-player service - Detained.
No Miss Quill this week, or Head Teacher Dorothea - that's for next week. Tonight we just had the five young regulars in an ensemble piece that takes place in a single room.
Quill has put everyone on detention, so they are locked in a classroom when a tear in space / time opens and a meteorite smashes them into some kind of limbo.
This chunk of glowing rock makes people tell the truth when they hold it - so each of the gang gets their moment. After reliving some significant memory, they start saying what they really feel - mainly about each other. The rock also causes them to become angry.
First up is Matteusz, who admits he's scared of Charlie. Then Tanya has a go, and tells them all how she knows they treat her like a kid. Ram and April both admit the same thing to each other - that she doesn't care for him quite as much as he does for her. Tanya proves to be the smartest person in the room, quickly working out that they can ask the rock questions whilst they are holding it, and so learn what it is, and how they can escape back to Coal Hill.
Turns out the rock contains the consciousness of an alien prisoner. He had four fellow inmates, but has killed them. It looks like this will be the gang's fate, until Charlie has his go. 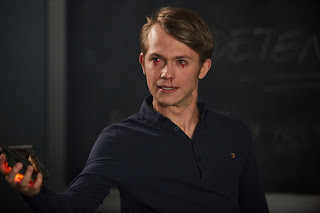 We've been waiting a while for this character to get into his stride. As an alien he proves stronger than his classmates, and is able to destroy the entity - sending them back home. Trouble is, the prison is now short of a prisoner, and Charlie is about to be dragged back there - being the one with the most guilt. For his race, thinking about a crime is the same as committing it. Quill appears and saves him - only to reveal that this is the last time she'll be doing this. Her hair is suspiciously longer than an hour ago, and she has a livid scar on her face. Next week, we'll find out what she was getting up to whilst the gang was in detention. What we do know is that she is no longer harbouring the parasite that enslaved her to Charlie.
I must admit that most of the characters did not come out of this very well. Ram acted like a right dick, and Tanya proved to be quite racist. An episode like this usually comes quite early in a series - a chance to get dirty washing out of the way so that the characters can then move on and we can start getting to like them. Here, we seem to have gone backwards. Matteusz is the only one who seems to be really nice, so I fear he may not be long for this, or any other, world.
As the penultimate episode is Quill-centric, it leaves only one last episode in which to do some mending for the gang's supposed friendships.
Posted by GerryD at 23:33