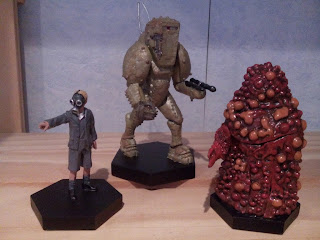 A week late, but the figurines for June finally arrived today - and what an eclectic mix. Two standard releases, plus the latest of the special editions. Can you guess which is the latter? Actually, the Mire is not that much bigger than the scale of the regular releases. Much smaller than the K1 Robot figurine, which was of comparable height.
From Series 1 we get the "Empty Child". Not much you can do wrong with this - being a schoolboy in a gas mask. It has taken me 10 years to realise that he doesn't wear a gas mask holder, which he should have done. Then we have the Gellguard - or Gel-Guard - or Gell-Guard (depending on what you read) - from The Three Doctors. They're often ridiculed, but I have always had a bit of a soft spot for these critters. This is a lovely addition to the collection. Not sure why they put it on a base. Like the Dalek releases, they could have left that off.
Haven't read the accompanying magazines yet, but leafing through the Mire one I did spot that Brian Blessed was due to play Odin, until health reasons forced him to pull out late in the day.
Next regular release will be the Second Doctor. The photo looks promising.
Check back at the weekend for a couple more A-Z items, plus a look at the second story of the 2005 series.
Posted by GerryD at 00:28